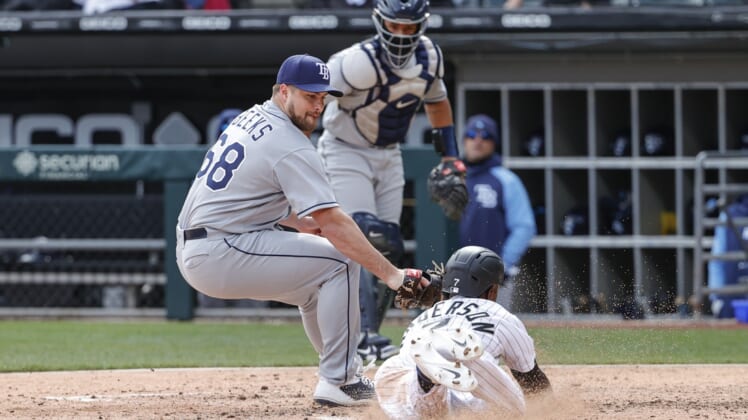 The Tampa Bay Rays played Sunday like the team that won 100 games and the American League East title in 2021. And that was more than enough to give the Rays a 9-3 victory over the host Chicago White Sox.

The Rays, who had 12 hits, scored four runs in the first inning and four in the eighth after scoring just four combined runs in the previous two games. Kevin Kiermaier and Francisco Mejía drove in two runs apiece to lead Tampa Bay on Sunday.

The Rays also got a strong performance with their by-committee pitching, which gave up only three hits. That allowed the Rays, who had lost five of their previous six games, to avoid a three-game sweep by the White Sox.

Tampa Bay, which has been bothered by early injuries to its pitching staff, got a strong performance out of J.P. Feyereisen. He made the first start of his career and pitched two perfect innings. Four relievers held the White Sox to three runs, including a ninth-inning solo home run by Gavin Sheets.

Chris Mazza (1-0), who replaced Feyereisen in the third, got the win.

The Rays got to Chicago starter Vince Velasquez (0-1) early as Tampa Bay’s two young stars, Wander Franco and Randy Arozarena, each had first-inning singles. Velasquez walked Ji-Man Choi to load the bases, and his control problems lingered with a bases-loaded walk to Yandy Diaz to force in Franco.

Josh Lowe then hit a chopper back to Velasquez, but the pitcher was unable to field the ball cleanly. Arozarena scored on the fielder’s choice by Velasquez.

Tampa Bay’s fast start continued with Manuel Margot, who had three hits on the day, singling to score Choi and Kiermaier drawing a bases-loaded walk to score Diaz.

In the inning, the Rays sent 10 men to the plate. There also was the rare sight of first-inning activity in both bullpens as the White Sox considered yanking Velasquez while Feyereisen tried to stay warm.