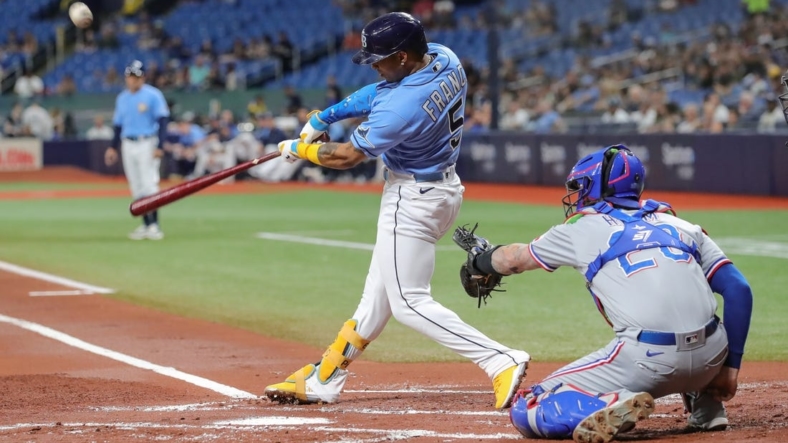 Rays opener Shawn Armstrong allowed one hit in 1 2/3 innings, striking out three before handing the ball to Ryan Yarbrough.

After the left-handed Yarbrough (2-8) spun three innings of four-hit, one-run ball, he was relieved by Javy Guerra, who along with Jalen Beeks, Jason Adam and Brooks Raley all turned in scoreless outings to preserve the victory.

The Rays’ staff combined to strike out eight and walk two.

Taylor Walls stroked a solo homer and Jose Siri went 3-for-3 with two runs and a stolen base. Isaac Paredes drove in two runs with a double as the Rays (81-64) moved to 48-25 at home.

Jonah Heim homered, and Marcus Semien (double) and Nathaniel Lowe had two hits apiece for the Rangers (63-82), who went 0-for-6 with runners in scoring position.

On a limited pitch count, Rangers starter Jon Gray (7-7) tossed 4 1/3 innings and allowed two hits and two runs. He fanned four and walked one over 67 pitches.

Looking to jumpstart an offense that has been mediocre lately, Rays manager Kevin Cash inserted rookie Jonathan Aranda into the leadoff spot, shuffled the order and watched it pay a quick dividend.

In his first at-bat, Aranda reached base after being struck in the foot by a pitch. He eventually scored on David Peralta’s sacrifice fly to shallow left-center, challenging the arm of left fielder Bubba Thompson and narrowly beating the throw home.

Siri singled and stole a base in the third, eventually reaching home on Wander Franco’s sacrifice fly.

But Texas answered the single tally in the next frame with Heim’s 15th homer of the season off Yarbrough. His 362-foot pop to left trimmed the deficit to 2-1.

After Gray departed with one out in the fifth, Walls greeted Taylor Hearn by driving his seventh homer of the season.

In the seventh, Paredes added some insurance by lacing a two-run double to right-center for a 5-1 advantage.