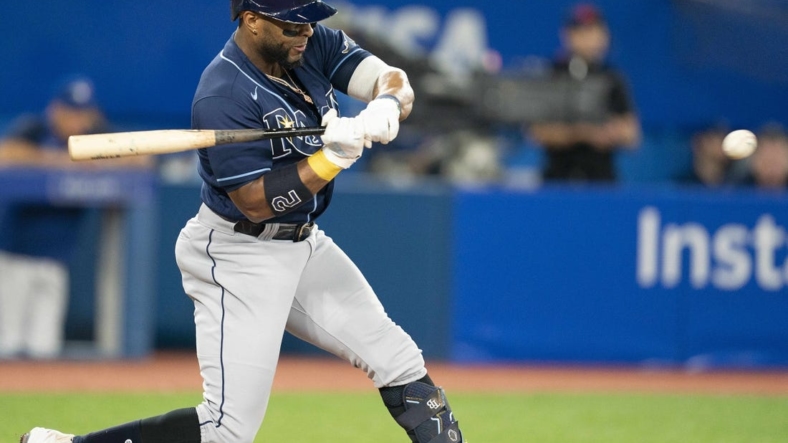 Yandy Diaz had three hits for the Rays (79-61), who ended a three-game losing streak. The Blue Jays (79-62) won the opener of the five-game series Monday night.

Toronto right-hander Julian Merryweather (0-3) allowed one run in one inning as an opener with scheduled starter Alek Manoah out with a stomach ailment.

Merryweather allowed singles to Diaz and Wander Franco to open the game. Diaz scored from third on a fielder’s choice groundout to third by Randy Arozarena.

Diaz and Franco opened the third with singles against Mitch White. Jonathan Aranda loaded the bases with an infield hit when first baseman Vladimir Guerrero Jr. missed the bag. One run scored on Arozarena’s fielder’s choice groundout and another came in on David Peralta’s sacrifice fly.

Arozarena scored from first on Manuel Margot’s single to left fielder Teoscar Hernandez, who held the ball before making a wild throw home.

Springs pitched around two walks in the bottom of the fourth.

White retired eight in a row before Margot singled with one out in the sixth. The inning ended when Christian Bethancourt grounded into a double play.

Shawn Armstrong replaced Springs in the bottom of the seventh and worked around a single and a walk.

After White pitched six innings, David Phelps had a perfect top of the eighth.

Phelps set the side down in order in the top of the ninth.

Raimel Tapia singled against Fairbanks in the bottom of the ninth with one out. George Springer reached first on catcher’s interference with Tapia moving to second. Guerrero struck out and Bichette grounded out on an 11-pitch at-bat as Fairbanks earned his seventh save.