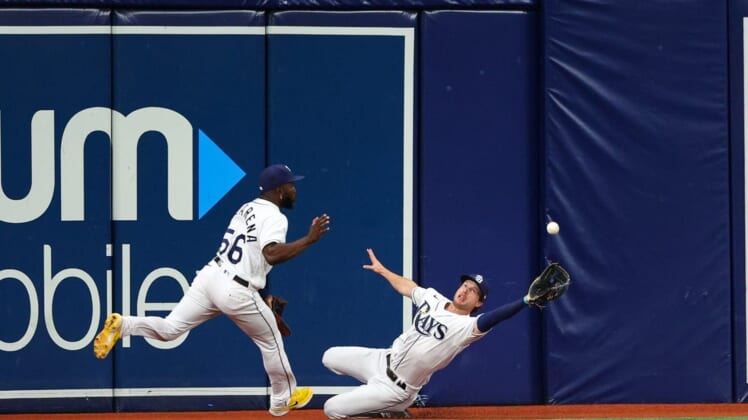 Tampa Bay ruined a strong 2022 debut by Boston left-hander Chris Sale with a wild sixth inning as the Rays defeated the Red Sox 3-2 on Tuesday night at St. Petersburg, Fla.

Sale, who had not pitched since last October due to a broken rib, threw 78 pitches in five innings. Sale, who has not been fully healthy for an entire season since 2019, held the Rays scoreless and allowed only three hits. The seven-time All-Star struck out five.

The Red Sox held a 2-0 lead when Sale was replaced by reliever Ryan Brasier in the sixth inning. But that lead did not last. The Rays scored three runs in the bottom of the inning to take a 3-2 lead with the help of a wacky Boston play.

A line drive off the bat of Tampa Bay’s Taylor Walls struck Boston reliever Matt Strahm (3-3) in the arm. Strahm, who was knocked down momentarily, got up and threw wildly toward first base. First baseman Franchy Cordero then made another throwing error.

Two runs scored on the play to give the Rays a lead they wouldn’t surrender.

The Rays got six innings of solid work from Corey Kluber (5-5), who earned the win. Kluber allowed two runs on four hits to go along with seven strikeouts and a walk.

A pair of relievers, Jalen Beeks and Brooks Raley, combined to pitch three scoreless innings to close it out. Raley struck out two in an inning of work to earn the save, his fifth.

The Red Sox broke open a scoreless game with the help of two blooping singles in the fifth inning off Tampa Bay starter Corey Kluber.

Alex Verdugo’s blooper set the stage. As Jeter Downs came up to bat, Verdugo, who went two-for-four, ran on the pitch, allowing Downs’ blooping single to put runners on first and third. Verdugo scored on a sacrifice bunt by Cordero to make it 1-0. Bobby Dalbech then tripled to drive in Downs.