Rays’ Shane McClanahan aims to bounce back vs. Tigers 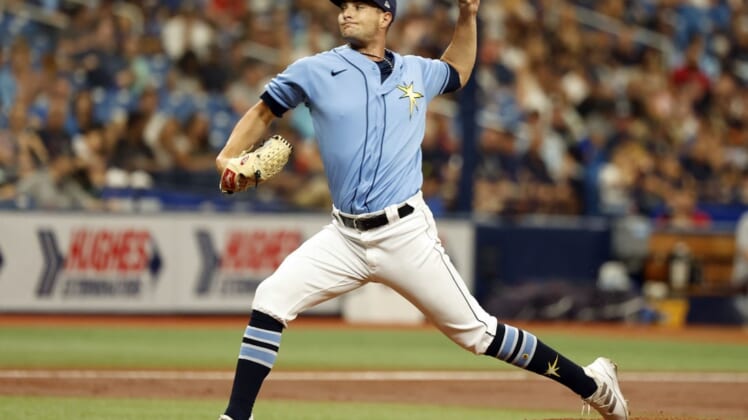 The Tampa Bay Rays are off to a strong start on their six-game road trip, and they will look to carry that momentum into their Saturday game against the Detroit Tigers.

Rays ace Shane McClanahan will look to bounce back from his worst outing of the season. McClanahan (10-4, 2.07 ERA) gave up a season-high five runs and seven hits while issuing three walks in 4 1/3 innings during a loss to the Cleveland Guardians on Sunday.

“It’s just how humbling the game of baseball is,” McClanahan said. “Things can be going right for so long, and one of these days is just going to sprinkle in. Ultimately, it’s up to me to keep working hard and put myself in a good spot again for the next start.”

McClanahan tossed a gem against the Tigers on May 17, limiting them to one run and four hits while striking out seven in seven innings. He’ll be pitching in Detroit’s home park for the first time after going 1-1 with a 1.50 ERA vs. the Tigers in two starts at Tampa Bay.

The left-hander will be opposed by rookie right-hander Garrett Hill, who will be making his sixth career start.

Hill (1-3, 5.88 ERA) has pitched five innings in each of his past four appearances. He gave up four runs and six hits to Toronto on Sunday. Hill pitches to contact — he has recorded just 11 strikeouts in 26 innings.

“He has to stay aggressive,” Tigers manager A.J. Hinch said. “His outings have been similar in that he’s had a hard time with two outs, (a) hard time one or two bad pitches that leave the yard. These are tough lineups, but at this level, you are going to run into tough lineups.”

Hill has yet to oppose Tampa Bay.

The Rays won the first two games of the four-game series. Their 5-3 victory on Friday was aided by a club-record 13 walks. Detroit didn’t score after the second inning, and the Rays finally took the lead with a three-run eighth.

Hinch was forced to burn through seven pitchers but his efforts proved futile as the Tigers lost for the sixth time in seven games.

“That’s incredible,” Hinch said of the walks. “I don’t really know how to describe it because it’s certainly unusual for our staff. We had a hard time from the get-go. … That was a bad night on the mound.”

Rays manager Kevin Cash was impressed by his hitters’ patience and ability to lay off close pitches. Brandon Lowe had the big hit, a go-ahead, two-run double in the eighth.

“That was a game that we felt like we had opportunities and we ended up making the most of it later with Brandon,” Cash said.

Tampa Bay has won three straight, and Lowe has been the biggest reason on offense. He has six RBIs through the first two games of the trip.

No. 9 hitter Taylor Walls also had a good night, as he reached base four times and scored twice. Isaac Paredes also had a big hit against his former team, driving home Lowe with a single to give the Rays an insurance run.

“There was a lot of confidence throughout the night. We were so close,” Cash said. “I’m glad it turned out the way it did and really happy that Isaac came up and added that extra run.”