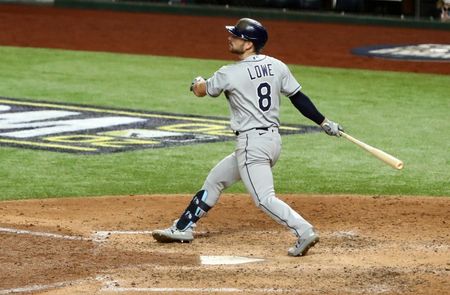 He might have been feeling a little bit of relief, too.

The 26-year-old was Tampa Bay’s best hitter in the regular season, with 14 homeruns – just three shy of his tally during his All-Star 2019 season – and a .269 batting average.

But Lowe saw his performance plummet in the postseason, going 6-for-52 at the plate prior to the World Series, as his team powered past the Houston Astros to win the ALCS and his failed to find his stride.

That changed Wednesday, when Lowe homered in the first inning and brought in two runs in a fifth-inning blast in the 6-4 Game 2 victory over the Los Angeles Dodgers, tying the best-of-seven series.

“To say that my mind wasn’t going different places during that struggle would be lying to you. There were times that I wasn’t feeling too good,” Lowe told reporters, reflecting on his ill-timed postseason slump that he hopes is behind him now.

“He’s shown over time that he’s a really good hitter, really good player and sometimes guys you’ve got to allow them to go through some tough patches and he’s been in one,” said Cash.

“He can go quiet for a little while but he can get as hot as anybody in baseball. Hopefully that’s the trend that we’re looking at going forward.”