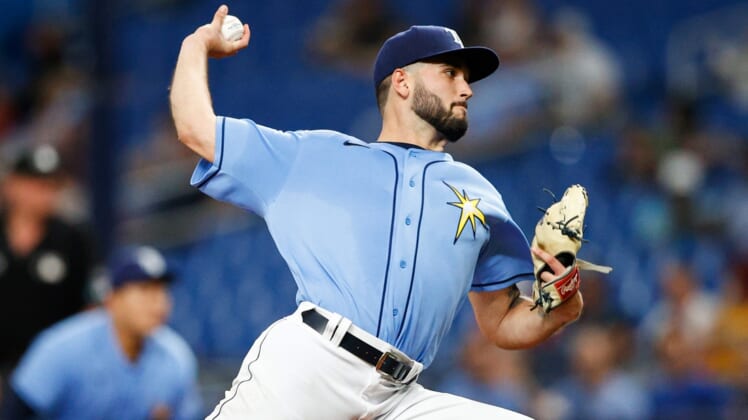 What was supposed to be a showcase for two top pitching prospects turned into a four-hour, 12-minute shootout Tuesday night as the Tampa Bay Rays’ Manuel Margot drove home Wander Franco in the bottom of the 10th inning for a 9-8 victory over the Oakland A’s in St. Petersburg, Fla.

The Rays scored two runs in the 10th inning as Franco previously drove in Brandon Lowe with a double. Franco, who has 11 hits through the first five games, is batting .550.

The offensive fireworks diverted attention from a rare double debut of opposing pitchers.

Tampa Bay’s Tommy Romero and Oakland’s Adam Oller became just the 28th combination of pitchers to face each other in their major league debuts, according to Baseball Reference. Neither lasted beyond the second inning.

Instead of Romero and Oller, offense was the story. Romero had been scheduled to start at Triple-A Durham on Tuesday, but was called up after the Rays placed pitchers Luis Patino and JT Chargois on the 10-day injured list.

Tampa Bay quickly overcame the 3-0 deficit with a three-run home run by Ji-Min Choi to take a 5-3 lead in the second. Oller, who was removed after Choi’s home run, lasted just 1.1 innings, gave up five hits and allowed five runs. He walked three and committed an error.

The Rays pushed their lead to 6-3 when Brett Phillips homered in the third inning. Oakland rallied to tie the game with a three-run seventh inning against reliever Ralph Garza Jr., who also was brought up from Durham earlier this week.

The A’s took an 8-7 lead in the 10th inning as Chad Pinder scored on an infield single by Billy McKinney. But the Rays took the second game of a four-game series with the heroics of Margot and Franco.

Ryan Thompson, who pitched the 10th inning, recorded the win and Lou Trivino took the loss.