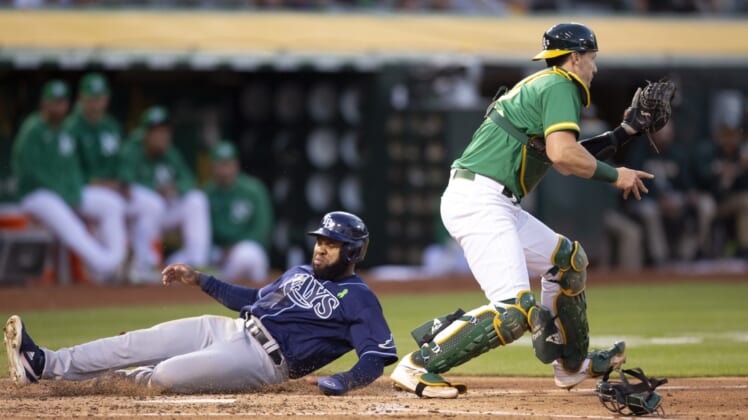 Yandy Diaz homered and scored two runs, Manuel Margot had three hits and Drew Rasmussen allowed just one run on one hit over five innings to lead the visiting Tampa Bay Rays to a 6-1 victory over Oakland on Monday.

Wander Franco and Diaz each had two hits and an RBI, while Margot went 3-for-4 with two doubles, an RBI and a run scored for the Rays, who ended a two-game slide.

After Diaz blasted a 407-foot homer to lead off the game, Oakland tied the game in the second inning on Pinder’s single to right. It scored Seth Brown, who had drawn a two-out walk and then stolen second.

Tampa Bay regained the lead in the third.

After Mike Zunino struck out swinging, Diaz singled, and then he scored when Oakland center fielder Cristian Pache misplayed Wander Franco’s single up the middle. Franco ended up on third after the ball bounced past Pache and rolled to the warning track.

That was plenty for Rasmussen (2-1), who walked just one and struck out three.

The Rays kept adding on runs. In the fourth, Margot led off with a double and scored on Zunino’s single to left. Two batters later, Zunino crossed the plate for a 5-1 lead on Franco’s single to right.

In the fifth, the Rays extended their lead to 6-1 when Kevin Kiermaier scored on Margot’s double to left.

While Oakland starter Daulton Jefferies (1-4) got out of the inning without allowing further damage, he didn’t return for the sixth inning. He allowed six runs on 11 hits with four strikeouts and no walks before being pulled for Domingo Acevedo.