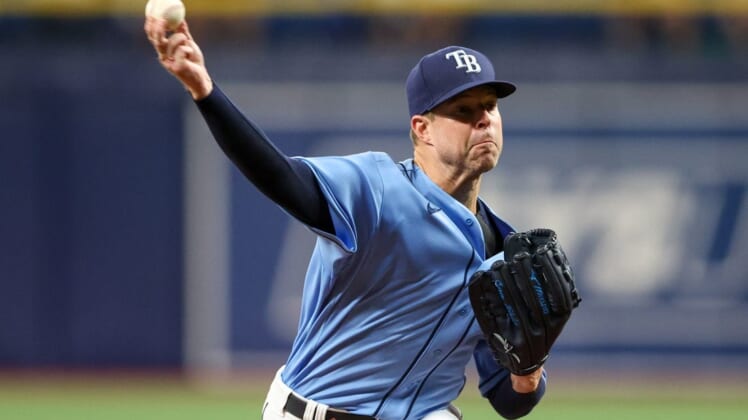 The Tampa Bay Rays erupted for six runs in the seventh inning to blow open a tight game and coast to an 11-1 victory over the Los Angeles Angels Tuesday night in St. Petersburg, Fla.

It was 3-1 entering the bottom of the seventh when Christian Bethancourt led off with a solo homer, opening the floodgates. The Rays also got an RBI double from Yandy Diaz and a two-run single by Taylor Walls in the inning before Bethancourt came to bat again, driving in two more with a single.

In all, the Rays finished with 14 hits, including three from Randy Arozarena and two each from Manuel Margot, Isaac Paredes and Walls in addition to Bethancourt’s two hits in the seventh inning.

It got so bad for the Angels that after the Rays added two more runs in the eighth inning before an out was recorded, infielder Phil Gosselin was called upon to pitch.

Gosselin’s first pitch hit 47-mph on the radar gun, but he retired all three batters he faced on two infield grounders and a fly-out to center to end the inning.

Rays starter Corey Kluber (8-7) got the victory after allowing one run on five hits in six innings, striking out three and walking none. The only run he allowed and the only run of the game for the Angels came on a Mike Trout homer.

The Rays ended a scoreless tie with two runs in the third inning off Angels starter Jose Suarez (4-6). Jose Siri led off with a double and one out later scored on a single by Margot.

Kluber kept the Angels off the scoreboard until Trout homered with one out in the sixth. It was Trout’s first homer since returning from a back injury that cost him 30 games, and his 25th of the season.

The Rays added to their lead in the bottom of the sixth on a solo homer by Paredes that put Tampa Bay up 3-1.

Suarez gave up a single to the next hitter, Walls, and was removed from the game. He went 5 1/3 innings, allowing three runs on eight hits while striking out five.