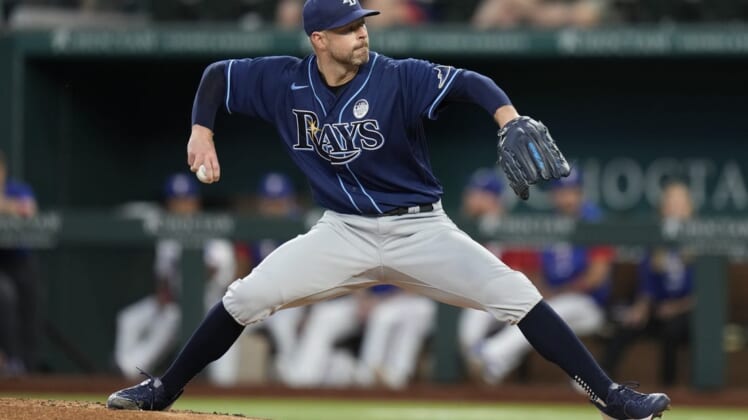 The Tampa Bay Rays have struggled scoring runs of late, but Corey Kluber didn’t require much support in a 3-1 win Thursday against the Texas Rangers in Arlington, Texas.

Vidal Brujan and Yandy Diaz had RBI hits, and Isaac Paredes walked with the bases full to account for all three Tampa Bay runs. With the win, the Rays salvaged a four-game series split after dropping the first two.

The last time Kluber (2-2) faced the Rangers in Arlington, he threw a no-hitter. The historical outing came on May 19, 2021, while the veteran right-hander was with the New York Yankees.

Ryan Thompson notched his third save.

On Thursday, the Rangers were able to scratch out four hits off Kluber, but not much else. The right-hander gave up one run in six innings, with four strikeouts. He didn’t walk a batter.

The outing closely mirrored Kluber’s last start. In a no-decision against the Yankees on May 28, Kluber gave up one run on three hits with five strikeouts. In that appearance, he also didn’t issue a walk.

Rangers starter Taylor Hearn (3-4) ran up a high pitch count and was replaced after four innings. The left-hander was charged with three runs on six hits. He struck out three but four walks came back to haunt him and his afternoon was finished after 89 pitches.

The Rays took a 1-0 lead in the second inning. Francisco Mejia doubled to open the inning and scored on Brujan’s ground-rule double to center.

In the third inning, Manuel Margot walked and scored on Diaz’s single. With the bases loaded, Paredes drew a seven-pitch walk that gave the Rays a 3-0 advantage.

In the sixth inning, the Rangers got on the board on Marcus Semien’s two-out homer off Kluber. The drive to left was his second home run of the season, and first at home.

The Rangers had runners on the corners with one out in the seventh inning. But Rays lefty Brooks Raley replaced Jason Adams and struck out Sam Huff and Eli White.

Texas stranded runners on first and second in the eighth inning on Mitch Garver’s fly out to center.