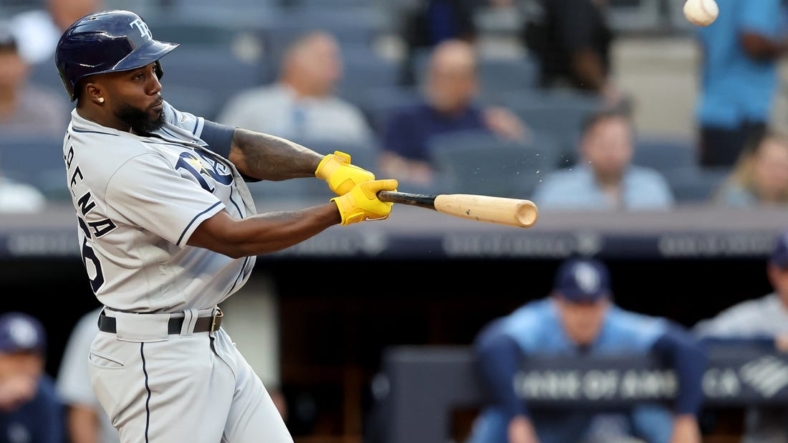 The Tampa Bay Rays and Boston Red Sox are trending in opposite directions as they open a three-game series on Friday night.

Tampa Bay visits Boston having won six consecutive games — good for the longest active streak in the majors — and 11 of 13, including a four-game sweep of the Los Angeles Angels this week.

Meanwhile, the challenge won’t be any easier for the Red Sox, who have lost four straight and six of seven after being swept by the Toronto Blue Jays in a three-game set to start the week.

“We’ve got to be better, that’s the bottom line,” said Boston manager Alex Cora, whose team finished its most recent series with consecutive 10-inning losses. “We have to make a conscious effort (to use) the whole field. … It’s not just here. It’s everywhere. Winning teams do that.”

The Red Sox left 12 runners on base and were 3-for-20 with runners in scoring position during their 6-5 setback to the Blue Jays on Thursday. In a tie game, they got a leadoff triple in the eighth inning, and they loaded the bases with no outs in the ninth inning, but they failed to score both times.

“I think there’s probably a little bit more trust in there now that we’ve got guys that there’s a lot of confidence that they can put the bat on the ball,” Rays manager Kevin Cash said. “And then you take Randy (Arozarena), the way he’s swung the bat here as of late, that gives you confidence.”

Arozarena has five homers and 15 RBIs in his past 15 games.

Manuel Margot (right patellar tendon strain) and Harold Ramirez (fractured right thumb) have both provided a spark for the Rays since returning from recent injuries.

Margot’s four-hit effort on Thursday included a two-RBI triple in Tampa Bay’s five-run third inning. He is 7-for-21 in five games since coming off the injured list.

“Love having him back,” said Drew Rasmussen, the starting pitcher who tied his career high with nine strikeouts on Thursday. “He’s such a spark. Just his personality really helps. But on top of it, he’s such a good player.”

Ramirez knocked in three runs on Thursday, giving him nine RBIs in his first nine games back from the IL.

Chargois returned this week after he was on the injured list since April 9 due to left oblique tightness. He appeared in relief twice in the just-concluded Angels series, yielding one run, which was unearned, in two innings.

The Rays have had a tremendous run, allowing just 16 runs in their past eight games. Their pitchers have allowed three or fewer runs in 12 of the past 13 games.

“We know how good this team can be,” Margot said. “We know what we’ve got to do to compete, and thank God that everyone stays healthy.”

The Boston rotation turns to Michael Wacha (8-1, 2.28 ERA) at the perfect time. The righty has thrown back-to-back scoreless starts against the Baltimore Orioles and the New York Yankees since being reinstated from the injured list on Aug. 14. He had been sidelined since late June due to right shoulder inflammation.

Most recently, Wacha held the Orioles to four hits over 5 2/3 innings last Saturday. On Aug. 14, he struck out nine Yankees across seven innings of two-hit ball.

“I’m just trying to pick up where I left off, and that’s getting ahead of guys and then putting them away as quickly as possible,” he said.

Wacha, who leads the Boston staff in ERA, has walked just 10 batters over his last nine starts covering 52 1/3 innings.

“You look up and his numbers are real,” Cora said. “He’s pitching five, six, and seven innings. Complete games when it matters, and we missed him for a while.”