Rays looking for 4th straight series win as they open vs. Angels 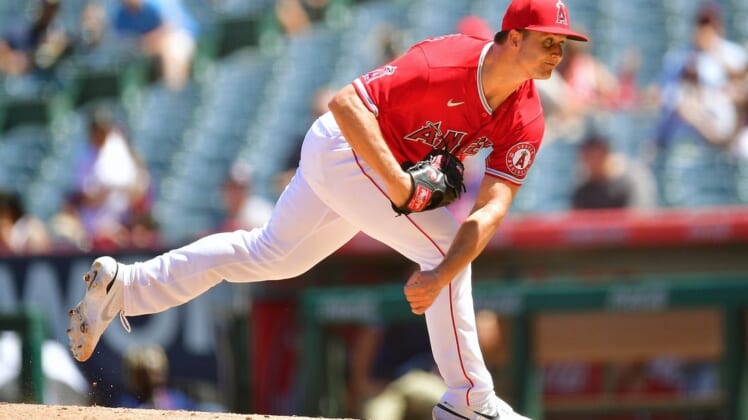 Tampa Bay has won three consecutive series to fortify the club’s position in the American League wild-card chase, but everything isn’t rosy in the Rays’ world these days.

After winning three of four games against the Kansas City Royals to open their eight-game homestand, the Rays will return Monday night to face the Los Angeles Angels in the first of four in St. Petersburg, Fla.

While Sunday’s 3-2 triumph over the Royals was the Rays’ seventh win in nine games, the mood was dampened somewhat when news broke that dynamic shortstop Wander Franco had suffered a slight setback and was pulled from his rehab assignment with the Triple-A Durham Bulls.

Franco, who has not been in the Rays’ lineup since July 9, was reported to have “persistent symptoms” in the fractured right hand that was surgically repaired.

The 21-year-old also missed time because of a quad strain and hand and wrist discomfort before finally having hamate surgery.

“He’s here today, and everyone was encouraged with the way he looked,” Tampa Bay manager Kevin Cash said. “We’ll just continue to take it day-to-day.”

His first loss this season occurred May 9 in Anaheim when the Angels scored three runs on three hits against him in an 11-3 home win. Jared Walsh hit a three-run homer off Springs.

The Angels won two of the three home games against the Rays in May. The 12-0 win after Springs’ defeat was behind rookie Reid Detmers’ no-hitter on May 10.

Interim manager Phil Nevin’s Angels won five of six from Aug. 8-14, but the rest of the summer month hasn’t yielded the same kind of results for the American League West’s fourth-place club.

After concluding its six-game homestand with three straight losses to the surging Seattle Mariners to open the week, Los Angeles departed for a 10-day, 10-game road trip that features stops in Detroit, St. Petersburg and Toronto.

On Sunday in their finale in Detroit, the Angels were blanked 4-0 by the Tigers. Star Shohei Ohtani took the loss as Los Angeles failed to score against Eduardo Rodriguez and four relievers.

“I was penciled in to start today, and just because I was sick, I wasn’t going to avoid it,” said Ohtani, who is not scheduled to pitch against the Rays. “I didn’t feel too well in the beginning of the day, and during my bullpen, I started feeling worse.”

Added Nevin: “He knew it was going to be a little bit of a grind, and it was. After the fourth, he didn’t feel good enough to hit, so I had to get him out of there.”

Acquired from the Atlanta Braves by the Angels, Tucker Davidson (2-3, 6.75) will make his seventh appearance (sixth start) of 2022 and his debut against the Rays.

The southpaw is 1-1 with a 7.20 ERA in two starts for the Angels with a win against the Minnesota Twins on Aug. 14.