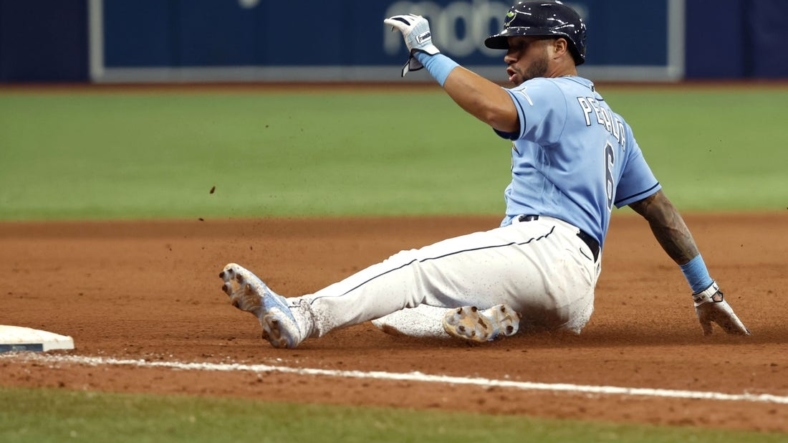 The Tampa Bay Rays did enough to inch closer to the New York Yankees in the American League East race.

The Rays hope to do enough to avoid letting another team move closer to them in the AL wild-card race Monday afternoon when they host the Boston Red Sox in the opener of a three-game series in St. Petersburg, Fla.

Tampa Bay is the AL’s second wild-card team with a one-game lead over the Toronto Blue Jays, who visit the Baltimore Orioles for a doubleheader Monday to open a four-game series. The Rays also are five games behind the New York Yankees for the lead in the AL East.

The Rays saw their five-game winning streak end Sunday afternoon when Shawn Armstrong allowed Aaron Judge’s 53rd homer two pitches into the game, and the offense did little in a 2-1 loss to the Yankees.

David Peralta had two of the six hits, but Tampa Bay went 1-for-7 with runners in scoring position and struck out 12 times, including a game-ending called third strike on Yandy Diaz with two on.

“I felt like we had momentum a couple of times throughout the game,” Tampa Bay manager Kevin Cash said. “We just couldn’t get anything going after a guy or two got on base and we kind of leave him stranded.”

“If we can win series, we’re going to find ourselves in a really good spot,” Cash said.

Two of Tampa’s losses during its run occurred Aug. 26-27 in Boston when the Red Sox won the first two meetings of a three-game series.

Boston heads into its final series with the Rays 7 1/2 games behind Toronto for the final wild-card spot while also trailing Baltimore, the Twins, Cleveland and the Chicago White Sox.

During its winning streak, Boston has scored 34 runs.

On Sunday, the Red Sox completed a four-game sweep of the visiting Texas Rangers when Trevor Story hit a three-run homer while Xander Bogaerts had three hits for his eighth straight multi-hit game. Bogaerts is 18-for-32 (.563) with a homer and 10 RBIs during that stretch.

Top prospect Triston Casas also made his major league debut in place of veteran first baseman Eric Hosmer, whose back issue may keep him out for the rest of the season.

“We’ll use him the right way,” Cora said. “He’s going to play almost every day.”

Tampa Bay will turn to Luis Patino (1-1, 3.95 ERA) in the first game of the series. He picked up a win against the Kansas City Royals in his most recent outing, allowing four hits in 5 2/3 scoreless innings while walking two and fanning four.

Boston will counter with Michael Wacha (10-1, 2.56), who is 7-0 with a 2.65 ERA in his past nine starts. He continued the winning streak Wednesday when he allowed two runs on four hits in six innings of a 6-5 win in Minnesota.