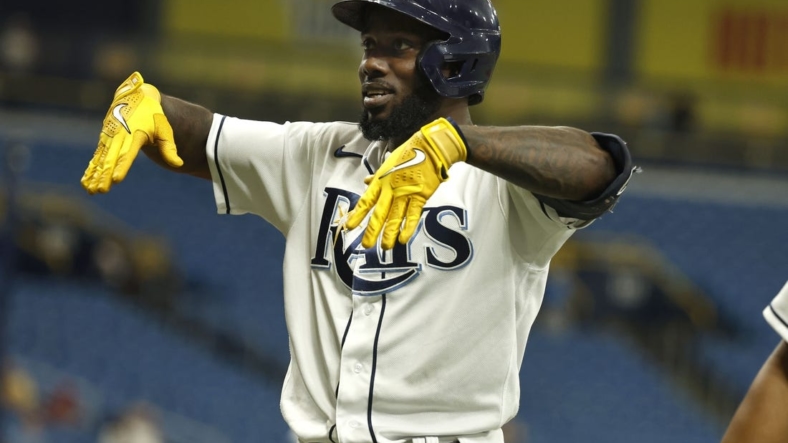 With a month left in the season, the Tampa Bay Rays’ bats are starting to heat up at the expense of the Boston Red Sox.

Tampa Bay (76-58) will look to complete a sweep of its visiting American League East rival when the two clubs finish their three-game set on Wednesday night in St. Petersburg, Fla.

He went 3-for-4, cracked a three-run homer, doubled twice and scored three times as his team won 8-4.

Arozarena is also approaching a single-season milestone, as he needs just one more long ball and three stolen bases to join the 20-30 club.

Four other batters of the nine in the Rays’ lineup produced multi-hit showings on Tuesday as the club posted 13 hits.

Tampa has scored 12 runs in the two victories over the Red Sox and is 11-4 overall this season against them.

The Rays managed to put together a complete game on a day that started with good news but left the team in a slight bind.

Scheduled starter Drew Rasmussen was placed on the paternity list and left the club to join his wife for the birth of their child.

Manager Kevin Cash considered all of his options and decided on a bullpen game. Opener JT Chargois and five relievers combined to allow four runs and just six hits to go along with 10 strikeouts and two walks.

With six relievers being used, Rays starter Jeffrey Springs (7-4, 2.62 ERA) could be forced to go deeper into the game on Wednesday to help save what’s left of the bullpen.

He will make his 11th appearance (third start) against the Red Sox in the finale; he is 0-1 with a 4.58 ERA against them.

His 19th homer decimated a security camera above the center-field wall and spoiled Rich Hill’s third start this season against his 2021 team.

Hill, who specializes in slow and slower curves, gave up the three hits on fastballs as the Rays refused to let him settle into a groove.

“They hit the fastball early on,” Red Sox manager Alex Cora said. “The third inning was soft contact. (Margot’s) bunt and (Arozarena’s) off the end of the bat double. It was a weird outing. He finished strong and gave us four (innings).”

Shortstop Xander Bogaerts left the game in the sixth inning (back spasms) and will miss Wednesday’s finale. He will be re-evaluated before Friday’s game in Baltimore.