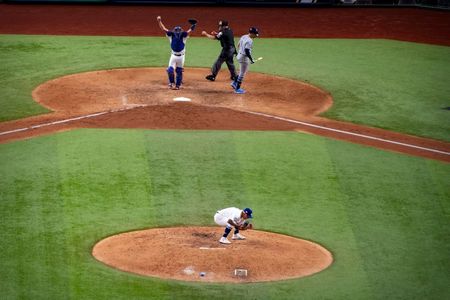 (Reuters) – The Tampa Bay Rays on Wednesday began the first day of an offseason sure to be haunted by thoughts of what might have been after a controversial decision to pull their ace pitcher from a do-or-die World Series game backfired.

The Rays, who reached the World Series in part because of a philosophy of not allowing starting pitchers to face hitters three times, were getting a much-needed gem from Blake Snell on Tuesday as he held the Los Angeles Dodgers in check.

But the ace left-hander, with his team up 1-0, was pulled by Rays manager Kevin Cash after 5-1/3 innings when he allowed his second hit. Six pitches later, the Dodgers led 2-1 and went on to close out the best-of-seven World Series.

“At the end of the day, I see both sides,” said Snell, who struck out nine Dodgers batters after throwing just 73 pitches in Game Six.

“The hardest thing for me is I was rolling, I was in a groove. I felt like I had them guessing. It’s just tough for me. It’s going to be tough for me to accept that. I really don’t know to look at it. However you look at it, we lost.”

With each passing year, a sport where managers have long played their hunches is seemingly being overrun by analytics and spreadsheet managing.

And while plenty of data exists to show pitchers lose their effectiveness the third time around a batting order, the move by Cash to pull Snell was immediately labelled one of the more controversial decisions in World Series history.

As Snell walked off the mound with frustration and disbelief painted on his face, current and former Major League Baseball players as well as prominent athletes from other professional sports took to Twitter to question the rationale.

“Computers running the game. Not humans,” tweeted Alex Rodriguez, who won a World Series with the New York Yankees in 2009. “Binders lead to blinders. Manage with blinders on, you miss what’s actually happening in real time.”

Cash said he understood the questions about his decision.

“I guess I regret it because it didn’t work out,” said Cash. “But I feel like the thought process was right.”

(Reporting by Frank Pingue in Toronto, editing by Ed Osmond)