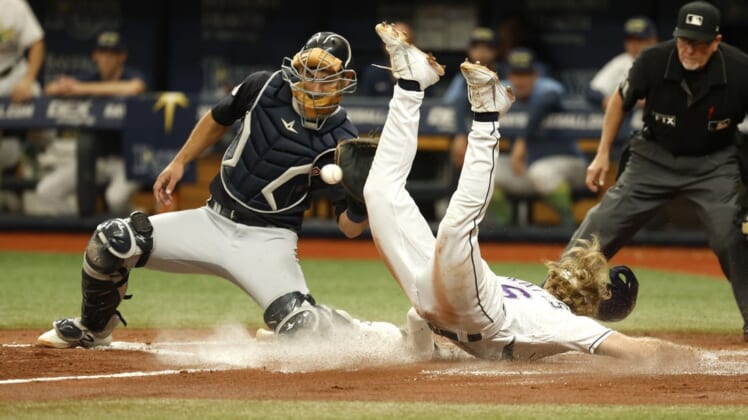 Right-hander Corey Kluber cruised through the first five innings against his former team, while Brandon Lowe and Yandy Diaz each hit a two-run home run, as the Tampa Bay Rays defeated the visiting Cleveland Guardians 6-4 on Saturday at St. Petersburg, Fla.

Brandon Lowe and Josh Lowe each had two hits for the Rays, who won for just the second time in their last eight games. Kluber (7-6), who pitched in Cleveland from 2011-19, gave up four runs on eight hits over six innings with no walks and 10 strikeouts.

Andres Gimenez hit a three-run home run for the Guardians, who are now 3-5 going back to July 23. Steven Kwan doubled for Cleveland to extend his hitting streak to 13 games.

Brandon Lowe got the Rays rolling with a two-run home run in the first inning. It was his seventh home run of the season after missing nearly two months with a back injury.

The Rays extended the lead to 3-0 in the second inning when Rene Pinto doubled home Taylor Walls. The Guardians matched that run when Owen Miller had an RBI single in the fourth inning to cut the deficit to 3-1.

The Rays made it 5-1 fifth inning on Diaz’s two-run shot, his fifth home run of the season and second in the last week.

The five runs in five innings were a welcome sight for the Rays, who had 16 total runs in their previous seven games (2.29 per game), while going 1-6 in that span.

Kluber ran into trouble in the sixth inning, giving up Gimenez’s blast at an estimated at 422 feet to cut Tampa Bay’s lead to 5-4.

Tampa Bay’s Jason Adam, Colin Poche and Pete Fairbanks each pitched an inning of scoreless relief, with Fairbanks earning his second save.

Tampa Bay added an insurance run in the eighth inning as Brett Phillips singled home Josh Lowe for a 6-4 advantage.

The Guardians’ Jose Ramirez had two hits but struck out against Fairbanks to end the game with the tying runs on base.