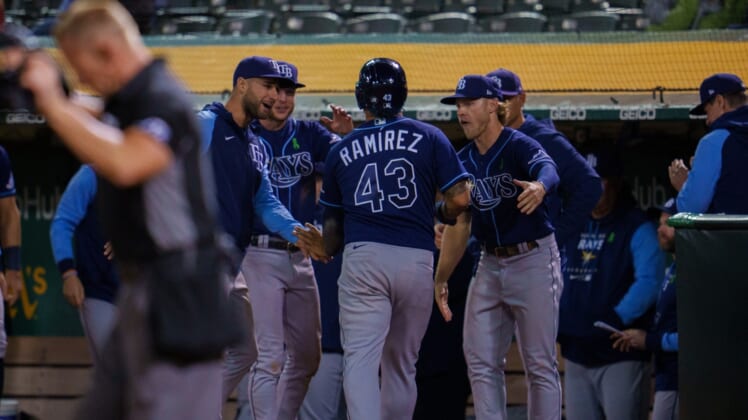 Mike Zunino’s pinch-hit two-run homer in the ninth inning set up Yandy Diaz’s go-ahead double in the 10th to lift the visiting Tampa Bay Rays to a 10-7 win over Oakland Athletics on Tuesday.

Tampa Bay added four more runs in the 10th: a two-run single by Isaac Paredes, Manuel Margot’s triple to center, and Zunino’s single. The Rays won their second straight while sending the A’s to their fifth loss in a row.

The A’s tried to rally in the bottom of the 10th off reliever Jason Adam, cutting the lead to 10-7 on an RBI double by Sheldon Neuse (3-for-5) and a run-scoring single by Sean Murphy.

Andrew Kittredge (2-0), who pitched a scoreless ninth, got the win, while Diaz, Margot, Zunino and Taylor Walls each had two hits for the Rays.

The Rays took a 1-0 lead in the first when Brandon Lowe’s double plated Diaz, but Oakland appeared to take control of the game in the bottom of the inning.

After loading the bases with two outs following a walk to Stephen Piscotty, Christian Bethancourt drew a free pass from Tampa Bay starter Ryan Yarbrough to force home a run.

Five pitches later, Kevin Smith blasted Yarbrough’s cutter over the left field fence for a grand slam and a 5-1 lead.

The Rays cut the lead in half in their next at-bat on a two-run home run by Brett Phillips.

Yarbrough, who was making his first start of the season after a stint on the injured list with a left groin injury, didn’t make it out of the third inning. Yarbrough allowed five runs on six hits with three walks and two strikeouts in 2 1/3 innings before he was relieved by Ryan Thompson.

The A’s got a rough start from right-hander Paul Blackburn. He gave up three runs on six hits with five strikeouts and a walk over 4 1/3 innings before turning it over the bullpen.

Zach Jackson held the Rays scoreless for two-thirds of an inning, and A.J. Puk threw a scoreless sixth and seventh before Dany Jimenez retired the side in the eighth.

Snead, however, couldn’t close it out in the ninth. After getting Paredes to line out to right, Margot singled and Zunino tied the game at 5-5 with his blast to center field.

Lou Trivino (0-2) relieved Snead and got Ramirez to ground out to end the inning. But he got rocked in the 10th inning for five runs (four earned) on four hits and an intentional walk before being pulled in favor of Justin Grimm.