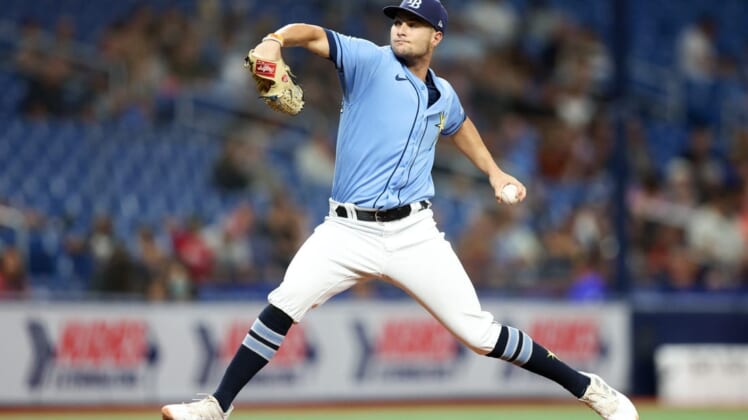 The Tampa Bay Rays scored two runs in the bottom of the 11th inning, rallying for a 4-3 victory over the Los Angeles Angels on Wednesday night in St. Petersburg, Fla.

Ramirez moved to third on a fielder’s choice, then scored the game-winner on a throwing error by Angels first baseman Jared Walsh. David Peralta hit a high chopper to Walsh, who fielded the ball cleanly and appeared to have a play at the plate. But his throw home was up the line and got past catcher Max Stassi.

JT Chargois (1-0), the Rays’ sixth reliever, got the win over Angels reliever Jaime Barria (2-3). Tampa Bay has won five in a row and 10 of 12, and the Angels have lost five straight and eight of nine.

The game was tied at 1-1 after nine innings, and both teams scored a run in the 10th. The Angels pushed across an unearned run on shortstop Taylor Walls’ throwing error. Walls atoned for his mistake with a sacrifice fly in the bottom of the 10th to tie the game at 2-2.

Trout’s 26th homer of the season and second in two days in the top of the eighth inning broke a scoreless tie and gave the Angels a lead, but the Rays tied the game at 1-1 in the bottom of the eighth on an RBI fielder’s choice by Ramirez.

In the sixth, the Angels threatened against McClanahan, the American League starter in last month’s All-Star Game, putting together a rally with two out and nobody on.

David Fletcher and Trout singled, and Shohei Ohtani walked to load the bases for Luis Rengifo. McClanahan, though, got Rengifo to ground out to second base.

That spelled the end of the night for McClanahan, who gave up four hits in six scoreless innings, striking out nine and walking one.

Mayers was making his first start in the majors this season. Initially in a key set-up role with the Angels, he spent all of June and July as a starter at Triple-A Salt Lake, making eight starts.

He pitched three games in relief for the Angels in August and was sharp Wednesday, throwing five scoreless innings and allowing just two hits. He got help from his defense, in particular a diving catch by Jo Adell on a liner by Francisco Mejia at the left-field line and near the foul pole in the fourth inning.