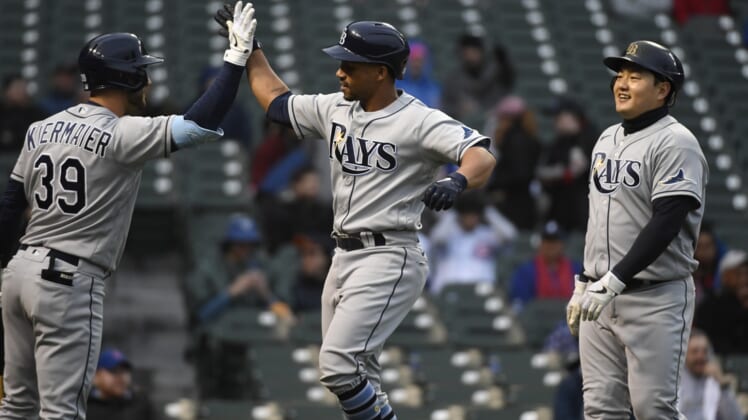 Fernando Mejia hit a two-run home run in the first inning Wednesday and drove in three runs as the visiting Tampa Bay Rays earned an 8-2 victory over the Chicago Cubs.

Jalen Beeks pitched two scoreless innings of relief to earn the victory as the Rays won in a game halted in the sixth inning because of rain. The start time was moved up an hour with inclement weather in the forecast.

The Rays jumped out to a 4-0 lead in the first inning to win their second game of the three-game series. Designated hitter Randy Arozarena had a two-out RBI single and scored on a throwing error by catcher Yan Gomes. Mejia followed with a two-run home run, his second of the season.

The Rays added a run in the second inning for a 5-0 advantage as Wander Franco continued his fast start with an RBI double.

The Cubs’ Frank Schwindel had an RBI double in the third inning and Nick Madrigal added an RBI ground out in the frame as Chicago pulled within 5-2.

Mejia added an RBI double in the fifth inning as the Rays added three more runs to spoil the 106th anniversary of the Cubs’ first game at Wrigley Field. The Cubs didn’t help themselves by committing three errors.

Tampa Bay starter Drew Rasmussen went three innings, allowing two runs on four hits with two walks and four strikeouts. Beeks (1-0) did not give up a hit in his two innings of work, while striking out two.

Chicago starter Marcus Stroman (0-2) went 4 1/3 innings and was knocked around for eight runs (seven earned), while giving up eight hits. He had two walks with seven strikeouts.

The Cubs managed only four hits and rookie Seiya Suzuki went hitless for the second straight game after his streak of nine-consecutive starts with a hit ended Tuesday.

The Cubs are scheduled to start a four-game homestand with the Pittsburgh Pirates on Thursday.

The Rays will get a much-needed day off Thursday before beginning a three-game homestand with the Boston Red Sox on Friday. It will be Tampa Bay’s first day off since its season started April 8.