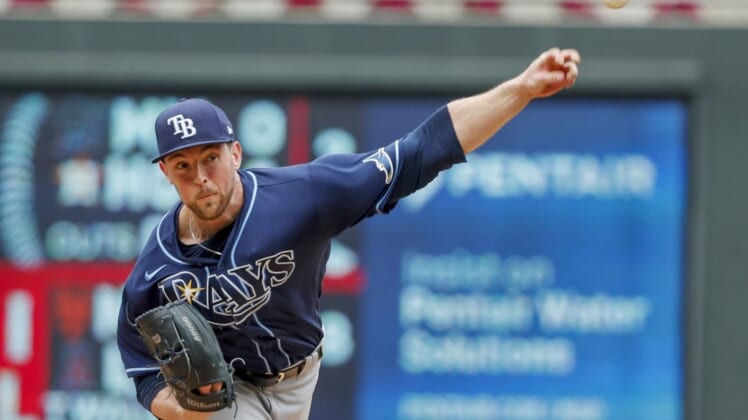 Kevin Kiermaier went 2-for-4 with a homer and two RBIs and Jeffrey Springs pitched 5 1/3 shutout innings to lead the Tampa Bay Rays to a 6-0 victory over the Minnesota Twins on Sunday afternoon in Minneapolis.

Randy Arozarena had an RBI double and reached base three times, stole two bases and scored twice. Ji-Man Choi extended his hitting streak to 11 games with two hits and an RBI for the Rays, who snapped a two-game losing streak.

Springs (3-2), making his seventh start since joining Tampa Bay’s rotation on May 9, held the Twins to just two singles and two walks. He left after throwing a career-high 94 pitches, including 59 for strikes and 12 swing and misses.

Relievers Matt Wisler, Jalen Beeks, Calvin Faucher and Colin Poche combined to hold Minnesota — which had scored 30 runs and clubbed 11 homers in its four previous games — to just three more singles over the final 3 2/3 innings to complete the shutout.

Cole Sands (0-3), making his third major league start, suffered the loss after allowing five runs on five hits over 4 2/3 innings. He walked one, to go along with hitting Arozarena twice, and struck out five. Carlos Correa had two of Minnesota’s five hits.

Tampa Bay took a 1-0 lead in the third inning when Brett Phillips led off with a walk, advanced to second on a wild pitch and scored two outs later on Choi’s infield single off the glove of Sands.

The Rays made it 3-0 in the fourth, scoring two runs on just one hit. Arozarena was hit on the right wrist leading off, stole second, advanced to third on a throwing error by Sands and then scored on a fielder’s choice by Taylor Walls, just beating the throw home by first baseman Jose Miranda. Two outs later, Vidal Brujan drove in Walls with a sharp single to right.

Tampa Bay extended the lead to 5-0 in the fifth when Arozarena lined a two-out double over the head of left fielder Trevor Larnach, driving in Manuel Margot, who opened the inning with a double. Kiermaier then singled in Arozarena.

Kiermaier finished the scoring with his seventh homer of the season leading off the eighth against Tyler Duffey, a 390-foot drive into the right field plaza.