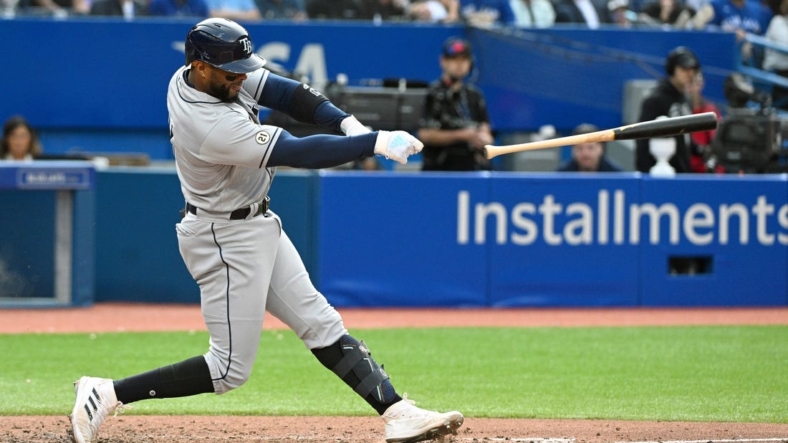 Yandy Diaz hit a three-run home run and the visiting Tampa Bay Rays shut out the Toronto Blue Jays 11-0 Thursday afternoon in the finale of a five-game series.

Isaac Paredes added a solo home run and had two RBIs for the Rays (80-63), who had lost five of their previous six games. Manuel Margot contributed a three-run double in a six-run ninth.

Rays left-hander Shane McClanahan (12-5) came off the injured list and allowed three hits and one walk with five strikeouts in five innings.

David Peralta singled with one out in the second, and Paredes walked. Rene Pinto blooped an RBI single to right. Jose Siri fouled out on a popped-up bunt, but Diaz followed with his ninth homer of the season on a blast to left to make it 4-0.

McClanahan retired 11 of his final 12 batters before JT Chargois replaced him in the sixth inning. Bo Bichette doubled off Chargois with one out and held second on Matt Chapman’s infield hit to shortstop. With two outs, Jason Adam replaced Chargois and struck out pinch hitter Cavan Biggio.

Gausman retired 13 of 14 batters after the homer by Diaz. Paredes broke that spell when he led off the top of the seventh with his 19th homer of the season, a shot to left.

Trevor Richards allowed RBI singles to Paredes, Randy Arozarena and Wander Franco in the ninth before being replaced by David Phelps, who allowed a walk and Margot’s three-run double.

Adam pitched around a single in the seventh, Javy Guerra set the side down in order in the eighth and Kevin Herget pitched a perfect ninth for Tampa Bay.

The Rays reinstated McClanahan (left shoulder impingement) from the IL Thursday and optioned left-hander Josh Fleming to Triple-A Durham. McClanahan made his first start since Aug 24.