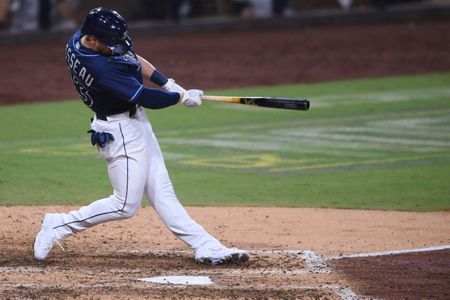 Brosseau got the final say in the pseudo-feud Friday night, hitting the game-winning homer off Chapman, giving the Rays a 2-1 win over the Yankees in the decisive fifth game of the American League Division Series at San Diego.

After the Sept. 1 incident, Rays manager Kevin Cash let his feelings be known about Chapman’s purpose pitch, saying, “Somebody’s got to be accountable. And the last thing I’ll say on it is, I got a whole damn stable full of guys that throw 98 miles an hour. Period.”

Brosseau ended up striking out in that first encounter with Chapman, the final out in a Yankees’ 5-3 win, but the two squared off again with one out in the eighth inning Friday in a 1-1 game. The at-bat lasted 10 pitches, ending when Brosseau belted a 100 mph fastball into the seats in left-center field.

Brosseau celebrated when the ball cleared the fence just as he was reaching first base, and the Tampa Bay dugout exploded in jubilation.

After the Rays closed out the win, though, Brosseau said the homer had no special meaning due to the history with Chapman.

Brosseau didn’t start Friday, but he singled as a pinch hitter for Ji-Man Choi in the sixth inning. He ended the night with two of the Rays’ three hits. The other was a solo homer by Austin Meadows in the fifth inning off Gerrit Cole.

Chapman said of the showdown with Brosseau, through a translator, “I thought I made some good pitches in that moment. I think it was a fastball to the middle in. He put good contact on it.”