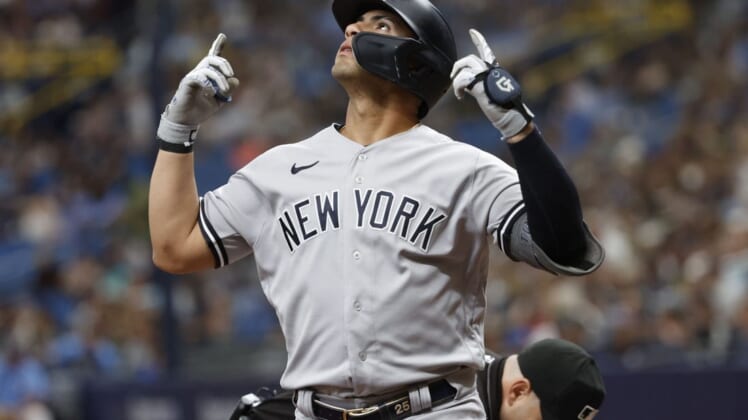 Choi and Walls went deep in the second and fifth innings, respectively, off Yankees starter Luis Severino (3-1) to put the Rays ahead 2-1.

Starter Shane McClanahan (5-2) was effective but not at his sharpest over six innings. However, he allowed only one run and scattered seven hits, and his seven strikeouts increased his major-league-leading total to 81.

In winning for the fourth time in five May starts, McClanahan pitched out of big trouble in the second, third and sixth innings and held the one-run lead.

Standout reliever J.P. Feyereisen induced three flyouts in a perfect ninth for his first save since last May 31, also against the Yankees.

New York’s Gleyber Torres was 3-for-4, homered and stole a base, and Aaron Judge (solo home run) and Miguel Andujar posted two-hit games.

After winning two of the first three tightly-pitched games, the visitors got to McClanahan in the second as he struggled with the command and efficiency of his slider.

Torres took advantage by belting a 3-2 slider with very little break high to left field for his ninth homer.

Choi matched Torres’ shot leading off the home second, slicing an opposite-field homer, his fourth, into the first row of seats in left on Severino’s 95 mph fastball.

Severino, who didn’t pitch from the stretch in the first five innings, was again hurt by the long ball in the fifth. The light-hitting Walls popped a belt-high four-seam fastball into the front row of the right field stands for his second homer and a 2-1 lead.

Without the benefit of a hit, the Rays used four walks and a hit batsman to add two more tallies to make it 4-1 in the seventh, with pinch hitter Harold Ramirez (walk) and Mike Zunino (hit by pitching) earning RBIs.

In the eighth, Judge cut it to 4-2 by leading off with his major-league-leading 18th homer.

However, second baseman Walls ended the frame with a spectacular, backhanded, run-saving play on Aaron Hicks’ grounder up the middle to deny a run.