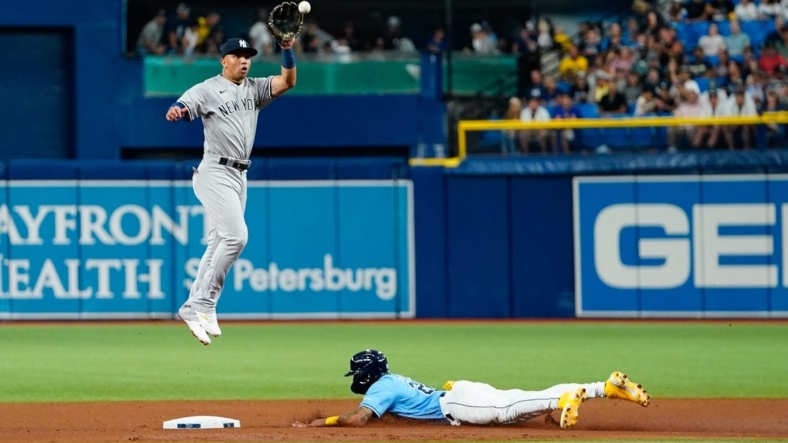 The Rays won their fifth straight and are within four of the lead for the first time since May 11. Tampa Bay improved to 16-4 since Aug. 13.

New York dropped its third straight and fell to 1-6 in its past seven games. The Yankees also fell to 18-31 since July 8 when they held a 15½-game lead.

Yandy Diaz hit a two-run single off New York fill-in starter Clarke Schmidt (5-4) as the Rays beat the Yankees for the fourth time in the past five meetings.

Aaron Judge hit his major league-leading 52nd homer leading off the ninth, matching his career high from his rookie season in 2017.

Kluber (10-7) won his third straight start and reached double-digit wins for the first time since 2018 with Cleveland. The two-time Cy Young Award winner struck out four and did not issue a walk for the third straight start. It was his longest outing of the season.

Kluber allowed a single to Giancarlo Stanton in the first. Stanton was thrown out trying to advance to second when a pitch skipped past catcher Rays Francisco Mejia but not far enough.

Kluber retired 14 straight before Aaron Hicks reached on a throwing error by second baseman Jonathan Aranda and Judge singled with one out in the sixth. The veteran right-hander then struck out DJ LeMahieu and retired Stanton on a groundout before ending his outing with two strikeouts in the seventh.

Pete Fairbanks pitched a 1-2-3 eighth and Jason Adam struck out two in the ninth for his eighth save after allowing Judge’s homer to right field.

Schmidt allowed two runs on four hits in 4 1/3 innings. Schmidt struck out two and walked none.

The Rays went ahead in the third, when Mejia and Jose Siri singled before Taylor Walls sacrificed the runners over. The Yankees pulled their infield in and Diaz lined a single off Schmidt’s leg and under second baseman Gleyber Torres into center field for a 2-0 lead.