Rays beat Orioles for 14th time in a row 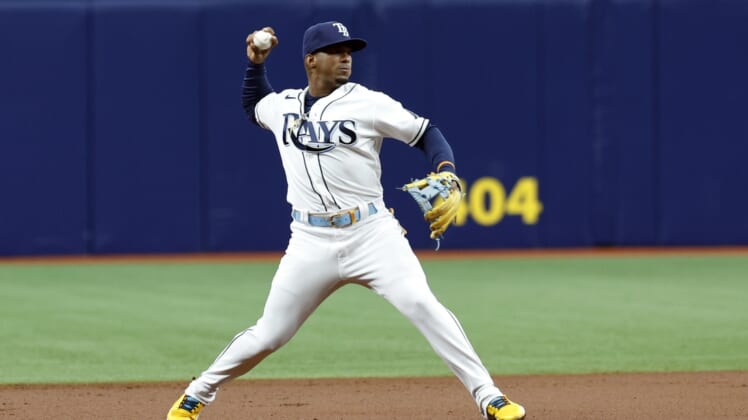 Reserve catcher Francisco Mejia had a homer and three RBIs as the Tampa Bay Rays beat the Baltimore Orioles for the 14th consecutive time Saturday afternoon, a 5-3 decision in St. Petersburg, Fla.

Mejia (2-for-4, two runs) singled in his club’s first run in the second inning then added the two-run shot in the following frame. Josh Lowe was 2-for-4 with two runs and his first career triple.

Rays starter Drew Rasmussen was strong through the first two innings but gave up two and three hits in the third. He tossed four innings, fanning three and walking one.

Lefty reliever Josh Fleming (1-0) pitched 3 1/3 scoreless innings to earn the victory, and J.P. Feyereisen and Andrew Kittredge closed out the victory for the Rays, who are 26-2 in their past 28 meetings with Baltimore.

The winless Orioles got a two-run homer from Ryan Mountcastle in a 2-for-4 outing, and Anthony Santander and Ramon Urias each had two of the visitors’ eight hits.

Shortly after Rays outfielder Randy Arozarena accepted his 2021 American League Rookie of the Year Award in pregame festivities, Josh Lowe got the Rays started in the second inning when his liner up the middle against a shifted outfield resulted in a triple.

In the third, Baltimore got to Rasmussen, as Mountcastle, who slugged 33 homers last year, lofted his first of 2022, a high shot to right.

Mejia, who drove in Friday’s game-winning run with a sacrifice fly, answered Mountcastle’s blast with his two-run shot — the club’s first — for a 5-2 lead.

After Fleming struck out five and allowed three hits and no walks in his stint, Feyereisen game in to get two outs in the eighth.

Kittredge allowed an RBI double to Jorge Mateo with two outs in the ninth, but the 2021 All-Star recorded his first save by striking out pinch hitter DJ Stewart — the potential tying run — to end the game.