Rays’ bats come alive in Game 2 to even World Series 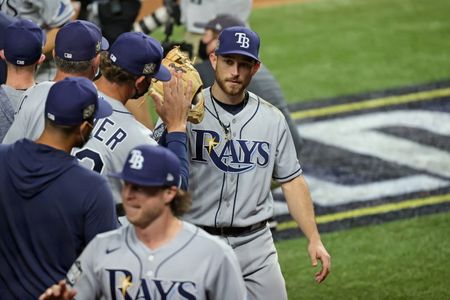 (Reuters) – Brandon Lowe homered twice as the Tampa Bay Rays offense came to life to defeat the Los Angeles Dodgers 6-4 and even the World Series at one game apiece on Wednesday in Arlington.

Lowe, the team’s best hitter during the regular season but who has struggled during the postseason, broke out of his slump with a solo shot in the first inning before adding a two-run blast in the fifth to extend the Rays lead to 5-0.

Starting pitcher Blake Snell neutralized the Dodgers lineup, not giving up a hit until Chris Taylor smashed a two-run homer in the bottom of the fifth that trimmed the Rays lead to 5-2.

Each team added a run in the sixth and the Dodgers closed the gap to 6-4 on Corey Seager’s home run in the next inning but the Rays bullpen closed out the game to even up the best-of-seven series ahead of Game Three on Friday.

The Dodgers, who won Tuesday’s opener 8-3, struck out 15 times and recorded just five hits against Snell and the Rays relievers.

“I attacked the zone really well, mixed it up, and did a good job keeping them off balance,” said Snell, the American League Cy Young Award winner in 2018.

“They are a very selective team with a few guys who are aggressive, so I had a pretty good game plan for what I needed to do to have success against them.

“Today it went my way but, I’ll see them again and I’ll have to be better.”

The World Series comes at the end of a truncated, 60-game regular season due to the COVID-19 pandemic and is being played entirely at the new $1.1 billion Globe Life Field in Texas with a limited number of fans in attendance.