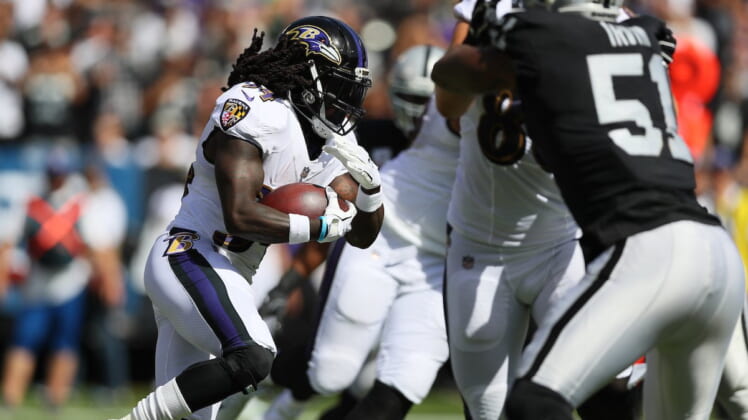 The Raiders take another tough one on the chin – this one at home. After a 2-0 start, Oakland finds itself in search of its own identity.

Starting with a 52-yard first play bomb from Joe Flacco to Mike Wallace, the Baltimore Ravens were looking at the Oakland Raiders in the football version of a rearview mirror. Except in this case, the object in the mirror looked further than it appeared.

The Ravens handed the short-handed and injured Raiders a 30-17 loss in front of a disappointed sold out crowd in Oakland – their third consecutive loss after opening the season 2-0. It also halted the Raiders six-game home winning streak.

Oakland suddenly finds itself in a deep – but not insurmountable – hole.

Consider this: over 50% of teams that begin an NFL season at 3-2, make the playoffs. Of those who go 2-3 to open the season? Only 20 percent make the post-season. Despite those odds, the Raiders are far from giving up on anything.

“We played our way back, and had a shot late but we’re just not playing well,” Jack Del Rio said after the game. “(On Manuel) I thought he did a good job, handled himself well, and had a couple key third down plays. But we had to do more defensively to give him more chances.”

The young and improving Raiders defense was bad from the get go. In addition to the opening 52-yard strike from Flacco to Wallace, the pair hooked up again for a 54 yard touchdown. Flacco passed for 222 yards against the depleted Raiders defensive backfield, with Wallace hauling in just three catches for 133 yards. Oakland also gave up 173 yards on the ground with the Ravens Javorius Allen carrying 21 times for 73 yards and one touchdown.

It’ didn’t help the Raiders also turned the ball over on their first offensive possession. But it was the Oakland defense that continued to flounder throughout the contest.

The Raiders, playing without David Amerson (concussion protocol) and first-round pick Gareon Conley (shin),  fielded a team with no real backup at the safety position. They were burned often in the first half and looked a bit lost. They did play like the have the first four weeks of the season in the second half, doing all they could to set up opportunities for backup QB EJ Manuel and the Raiders offense to put them back in the game.

On offense, EJ Manuel did yeoman’s work but could never get enough to put the team fully back in the game. Manuel finished the game 13-of-26 for 159 yards and one touchdown. Manuel did not throw an interception.

The quarterback’s one standout highlight came on a 41-yard touchdown pass to Michael Crabtree.

Oakland’s running game showed some improvement and did take some pressure off Manuel who is playing for the injured Derek Carr.

Marshawn Lynch scored once from a few yards out and carried the ball 12 times for 43 yards. Jelan Richard finished with nine carries and 37 yards.