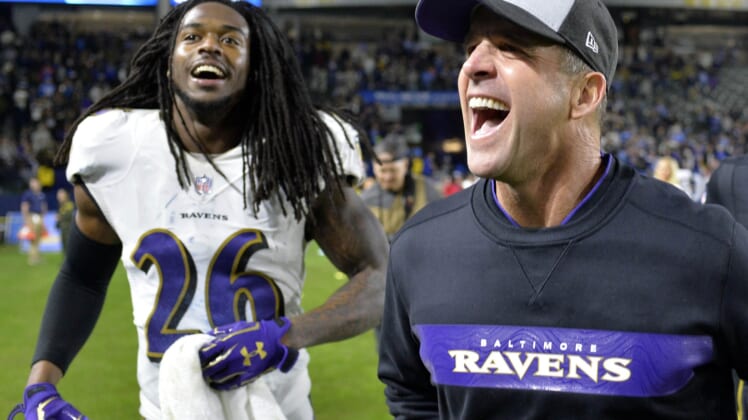 All the talk about the Baltimore Ravens trading John Harbaugh reminds me that the NFL’s silly season is truly upon us.

It all started Sunday morning when ESPN’s Adam Schefter reported that some teams think the Ravens could be convinced to part ways with Harbaugh for the right price in a trade.

Okay. Maybe some teams are delusional enough that they really do think the Ravens could be willing to part ways with Harbaugh. I can sort of buy that.

Then, later on Sunday as the Ravens were sewing up the AFC North in a thrilling victory over the Cleveland Browns, earning a trip to the playoffs, another “report” emerged. This one indicated that the Ravens actually might intentionally try to trade Harbaugh.

This one came from a source not quite as reputable as Schefter. Fansided wrote that the Ravens are supposedly tired of Harbaugh meddling with the roster since Ozzie Newsome retired as general manager.

In the immortal words of Chad Johnson, “Child, please.”

Not only will Harbaugh not be pried away from Baltimore in a trade, there’s no way in hell the team is going to be actively trying to get rid of him.

Let’s not forget that it was only a couple weeks back that the team itself announced to the world that Harbaugh will be back in 2019 and that the two sides are working on a contract extension.

The notion that such an announcement was made to somehow lure other teams into offer something for Harbaugh in a trade is beyond ludicrous.

First off, take a look around the league. There is an incredible shortage of top-tier coaching talent in the NFL these days. There are currently eight teams — a full quarter of the league — looking for head coaches because of this shortage.

Why in the world would the Ravens get rid of a coach who’s been as respected and successful as Harbaugh? Who’s coming in to replace him that would be any kind of upgrade?

There are few coaches out there with as much experience and success as Harbaugh brings. Since taking over in 2008, Harbaugh has a record of 104-72. He has led the Ravens to eight winning seasons, two 8-8 seasons, and only one losing season. Oh, and he has a Super Bowl win.

On top of it all, Harbaugh proved he is willing to embrace change. His decision to alter the team’s course midway through the season — sticking with rookie Lamar Jackson instead of going back to what he knows in Joe Flacco — was the biggest reason Baltimore is headed to the playoffs as one of the hottest teams in the league.

Even if the Ravens landed a couple of first-round draft picks in a trade for Harbaugh, they’d be losing. Championship-caliber coaches are worth their weight in gold. It takes special men to lead teams to titles and navigate the oft’ choppy waters in this league.

Harbaugh is a proven commodity, which is why he’d be in such high demand if the Ravens were open for business. But Baltimore wouldn’t be so foolish. So let’s stop with all the Ravens trading John Harbaugh talk, shall we?