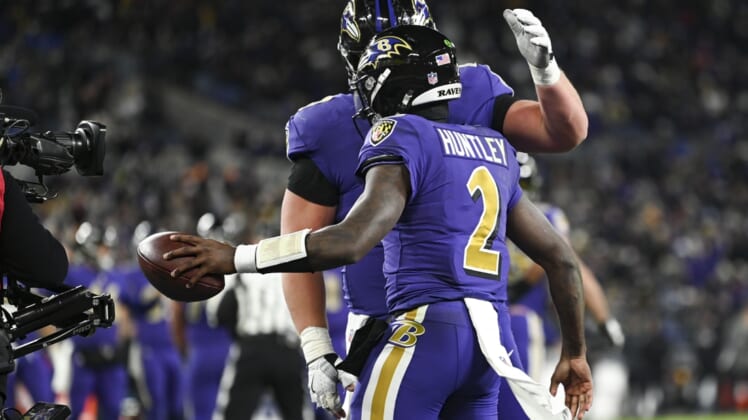 It’s showdown time in the AFC North, where the visiting Baltimore Ravens take on the Cincinnati Bengals on Sunday. The question remains, however, if Lamar Jackson will be back in time for the clash.

The Ravens (8-6) and Bengals (8-6) are tied for the division lead, with Cincinnati getting the nod — and the No. 4 spot in the AFC playoffs currently — thanks to a 41-17 head-to-head win in Baltimore in Week 7. The Ravens start the weekend eighth in the AFC, one spot outside the playoff field.

It’s a huge game for both sides, but Baltimore coach John Harbaugh isn’t in a rush to put a label on it.

“Anybody can put whatever label on it that they want,” Harbaugh said. “That’s not really my mission — to put labels on it and name it with any particular phrase.”

It’s not do-or-die for the Ravens, who are still unsure if Jackson — the former MVP — will be available. Harbaugh offered no update on Jackson on Wednesday, saying only the team is in “wait and see” mode. Jackson did not practice, and has not practiced since suffering an ankle injury at Cleveland nearly two weeks ago.

Backup Tyler Huntley started in place of Jackson in last week’s 31-30 loss to the Green Bay Packers, and played well with two touchdowns on the ground and two more in the air. But the Ravens have lost three straight, by a combined four points and thanks in part to three failed 2-point conversions, and could use any edge they could muster in an injury ravaged season.

“I’m hopeful for (Jackson), and I know he’s doing everything he can to get back and play for us,” receiver Marquise Brown said.

The Bengals snapped a two-game slide with a 15-10 win at Denver last week, but hope to recreate the offensive explosion that led to their first win this season at Baltimore. Then, QB Joe Burrow threw for a career-high 416 yards and rookie WR Ja’Marr Chase had a career-high 201 yards receiving on eight catches.

Cincinnati will be going for its first season sweep over the Ravens since 2015, which was also the last time they won the tightly contested AFC North. With three games to go, the Bengals control their own destiny in search of the division title and a playoff spot. Burrow (3,640 yards, 26 touchdowns) and Chase (1,038 yards, 10 TDs) are a big reason Cincinnati is in this position.

“Big games in December are why you play this game,” Burrow said. “And this is a big one.”

With a win, Cincinnati would have a one-game lead and the tie-breaker over Baltimore with just two games to play. It would be a huge step toward the playoffs for coach Zac Taylor, but he isn’t giving voice to the postseason just yet.

“All we care about right now is Baltimore,” Taylor said.