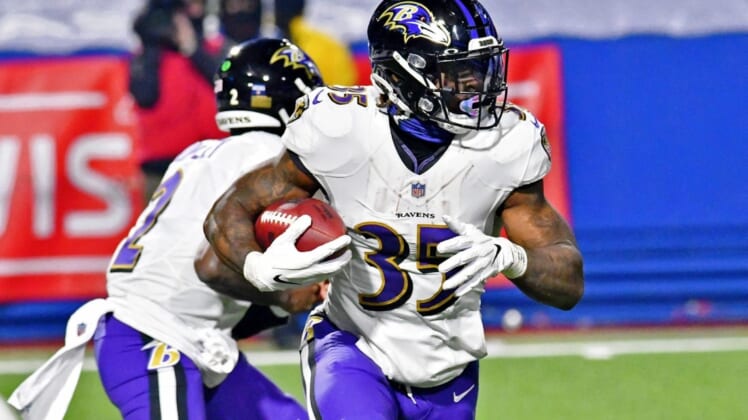 The Baltimore Ravens put running back Gus Edwards on the reserve/physically unable to perform list Tuesday, meaning he’ll miss at least the first four games of the regular season.

Edwards, 27, missed the entire 2021 season after tearing his ACL days before the Ravens’ Week 1 game. Edwards will be eligible to return Oct. 9 against the Cincinnati Bengals.

“That’s kind of what we expected. We did not expect him to be back probably the first part of (the season),” Ravens coach John Harbaugh said Tuesday. “I’d say Gus is still on schedule. I fully expect him to play quite a bit of football this year.”

Edwards tore up his knee in the same practice as All-Pro cornerback Marcus Peters. Edwards was set to be RB1 after J.K. Dobbins tore his ACL in an August 2021 preseason game.

Dobbins’ status for Week 1 is also uncertain. He was activated off the PUP list on Aug. 8.

“We’ll see,” Harbaugh said, when asked if Dobbins would be ready for the start of the season. Mike Davis is next in line on the RB depth chart.

Edwards has played in 43 games (13 starts) for the Ravens since joining the club as an undrafted free agent in 2018. He has rushed for 2,152 yards and 10 touchdowns in a mostly backup role.