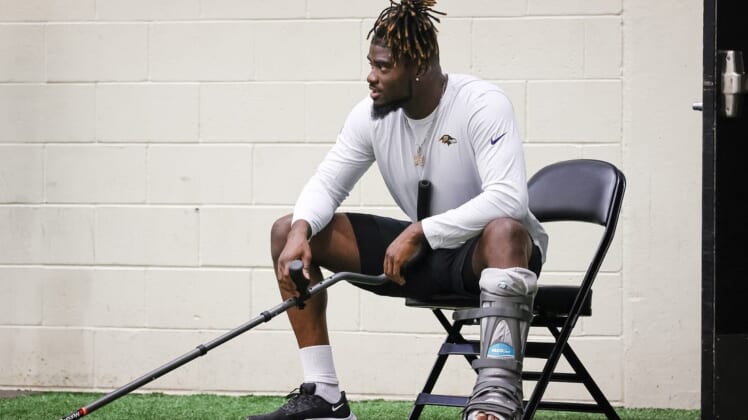 Second-round pick David Ojabo remains the final unsigned player in the 2022 NFL Draft class, and terms of the third year of a contract proposal from the Baltimore Ravens have inspired a holdout.

Rare in recent years because of a collectively bargained salary slot system for all draft picks, holdouts are generally sparked by offset language or the percentage of a contract guaranteed by the team.

Ojabo is slotted for a contract in the range of $7.9 million over four years as the No. 45 pick in the 2022 draft. He played in college at Michigan.

The guarantee in the third year of Ojabo’s deal reportedly caused the delta between the two sides in negotiations.

However, Ojabo could miss most or all of the 2022 season with a ruptured Achilles. He was injured during his pre-draft Pro Day workout in Ann Arbor.

General manager Eric DeCosta said in May that he Ojabo returned from a torn Achilles to return to running in 3 1/2 months. More relevant, DeCosta recalled edge rusher Terrell Suggs returning from a partially torn Achilles in April 2012 while playing basketball only to suit up for the Ravens the following October.

Ojabo did not report with the Ravens on Tuesday for the start of training camp.

Considered a first-round talent prior to his injury, Ojabo had 11 sacks and a program-record five forced fumbles in 14 games for the Wolverines in 2021.