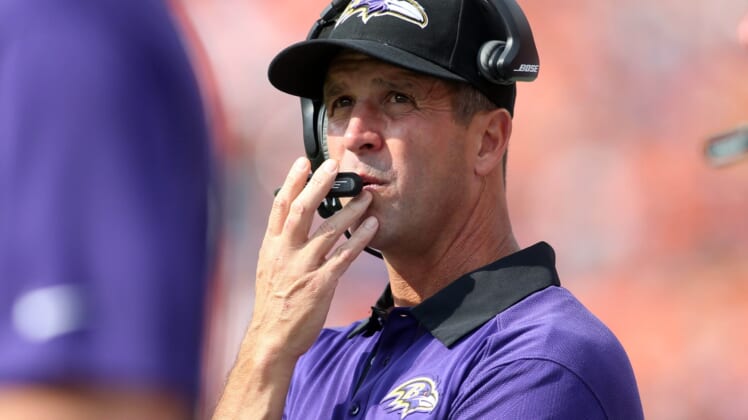 The Baltimore Ravens are simply busting with big news this Friday afternoon. Following the news that general manager Ozzie Newsome plans to step down after 2018, Ravens owner Steve Bisciotti had this to say when asked if he thought about firing head coach John Harbaugh after 2017.

“It was certainly a consideration, but not one that I was inclined to make this year,” Bisciotti said, per Austin Knobiauch of NFL.com.”

It is not too unusual for any teams’ brass to evaluate the head coaching position after a failed season. Though, Harbaugh’s Ravens did finish with a 9-7 record, which was their best of their past three seasons.

The team narrowly lost its chance to advance to the postseason when the Ravens fell within the final seconds to the Cincinnati Bengals in Week 17.

Bisciotti continued with this in support of Harbaugh.

“He’s under as much pressure than probably he’s ever been in his life, and I expect him to keep his chin up and take his positivity and his talents and make the most of the season.” “I may as well replace him now if I tell him to make the playoffs or you’re out of town next year. That’s not the way we run business here.”

Harbaugh is probably relieved to know this. He has coached the Ravens since 2008, which was the same year quarterback Joe Flacco was drafted. In his 10 years coaching, the Ravens have missed the playoffs only four times. Unfortunately, three of those seasons occurred in the last three years.

All the Ravens can do is prepare to perform better next season.