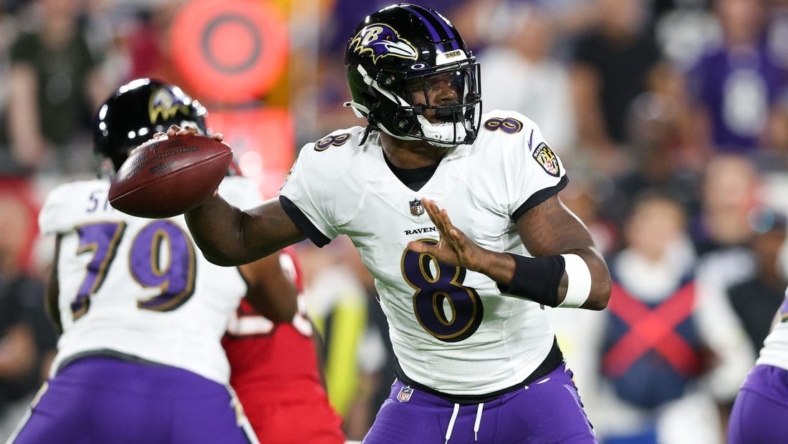 Futures odds shifts are beginning to spotlight a rising contender in the AFC: the Baltimore Ravens.

The Ravens jumped to +800 to win the conference at 5-3 following the Cincinnati Bengals’ loss to the Cleveland Browns in an AFC North duel on Monday night that capped Week 8 in the NFL. Cincinnati is 4-4 and the Browns are 3-5.

Baltimore had been +1400 in July to win the AFC at FanDuel and BetMGM.

Lamar Jackson has approached his 2019 MVP form and the Ravens upgraded their defense on Monday with the trade deadline acquisition of inside linebacker Roquan Smith from the Chicago Bears.

Baltimore is still well back of the favorites to win the Super Bowl, at +1600 at most books at +1800 at DraftKings.

That second tier with the Ravens at most sportsbooks includes the Dallas Cowboys, San Francisco 49ers and Minnesota Vikings.

The top tier includes AFC favorite Buffalo, now at +320 to win the Super Bowl ahead of the Philadelphia Eagles (+500) and Kansas City Chiefs (+700) at Caesars.

BetMGM, Caesars and FanDuel all have elevated the projected win total for the Ravens.

FanDuel has Jackson at +950 behind the same three quarterbacks. He’s +1000 at DraftKings.