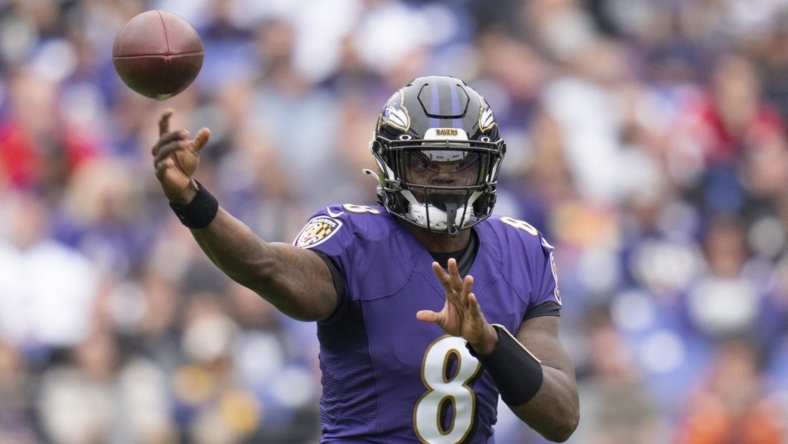 The Baltimore Ravens and Tampa Bay Buccaneers enter their Thursday night game tied for first place in their respective divisions.

But looks are certainly deceiving in the case of two teams that entered the season with extremely lofty expectations.

The Bucs (3-4) have lost four of their past five games, the most recent coming at the hands of a Carolina Panthers team in the midst of a fire sale and starting a third-string quarterback.

The Ravens (4-3) squeaked by the Cleveland Browns on Sunday, but Baltimore’s once-vaunted defense enters Week 8 ranked 23rd in the NFL in total yards allowed (366.4).

That’s makes the kickoff game to Week 8 in the NFL so critical for both teams.

The Ravens started Thursday as 1.5-point road favorites at DraftKings and BetMGM, but the line had flipped by midday to the Bucs favored by 2.0 points at both sportsbooks.

The action has been more evenly split at BetRivers, where Baltimore has drawn 54 percent of the money as a 1.5-point underdog.

PROP PICKS
Ravens RB Gus Edwards to Score TD (+160 at BetRivers): This has been the most popular player prop bet at the sportsbook. Edwards rushed 16 times for 66 yards and a career high-tying two touchdowns in his return from a torn ACL on Sunday. However, he was also listed as questionable on Wednesday with a knee injury, so it’s worth waiting to make sure he’s active Thursday night.

Bucs WR Mike Evans to Score TD (+105 at BetMGM): This is the second-most popular pro bet at BetMGM. Evans will no doubt be motivated following a critical drop of a sure touchdown pass in last week’s embarrassing loss to Carolina. Baltimore enters with the 26th-ranked pass defense in the NFL.

Bucs QB Tom Brady Over 1.5 TD Passes (-155 at DraftKings): Did we mention the Ravens’ porous pass defense? The Over on this prop has drawn 83 percent of the total bets and 82 percent of the money despite Brady throwing only eight touchdown passes through seven games. Another popular pick has been Brady Over 281.5 passing yards at -115, which has drawn 55 and 70 percent of the action, respectively.

The Buccaneers already had veteran safety Logan Ryan (foot) on injured reserve and are very thin in the secondary behind Mike Edwards and Keanu Neal. There was hope defensive tackle Akiem Hicks (foot) would return, but he was ruled out Thursday.

For the Ravens, Gus Edwards (knee) was a limited practice participant all week and was listed as questionable on Wednesday, while defensive end Calais Campbell (illness) didn’t practice all week and was ruled out.

PREDICTION
Former Bucs defensive end Jason Pierre-Paul returns to Tampa Bay and will be part of a Baltimore pass rush desperately trying to protect that soft secondary. Time of possession could be critical and the Bucs enter with the league’s worst ground game (64.4 yards per game) while the Ravens rank seventh at 189.7 yards per contest. — Ravens 27, Bucs 24