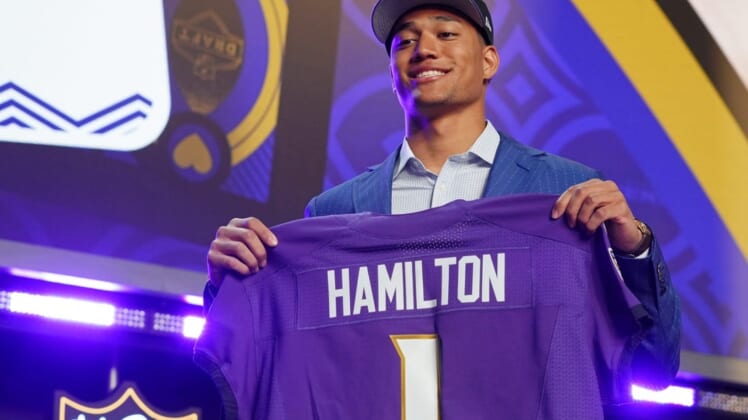 Hamilton, a defensive back from Notre Dame, agreed to a four-year contract and will receive a fully-guaranteed $16.3 million, plus a signing bonus just more than $9 million, according to multiple reports. The deal also includes an option for a fifth year.

The Baltimore Sun reported that it is believed to be one of the largest rookie deals in franchise history.

A two-time All-American at Notre Dame, the 6-foot-4 Hamilton racked up 138 tackles, eight interceptions and 16 pass breakups for the Irish across 31 games in three seasons. He has also impressed the Ravens in offseason workouts.

“He’s doing the things that we’re expecting him to do,” Ravens defensive coordinator Mike Macdonald told the Sun. “… He’s right on schedule, but we don’t tell him that — try to provide some sense of urgency for him. But he’ll get there. Really pleased with Kyle.”

The Hamilton deal comes five days after Baltimore signed its other first-round selection, center Tyler Linderbaum, who was the 25th overall pick.

The Ravens have now signed six of their 2022 draft picks. Five selections remained unsigned, including second-round pick David Ojabo, an outside linebacker from Michigan.

Across the NFL, quarterback Kenny Pickett remains the highest unsigned draft pick from this class. Baltimore’s divisional rival, the Pittsburgh Steelers, selected him out of Pitt with the 20th overall pick.