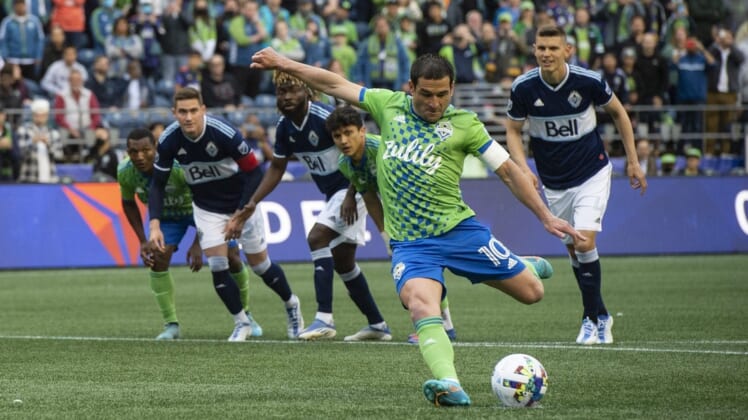 Raul Ruidiaz scored two goals and the Seattle Sounders continued their domination of the visiting Vancouver Whitecaps with a convincing 4-0 victory on Tuesday night.

Nicolas Lodeiro tallied on a penalty kick and Alex Roldan also scored as Seattle stretched its unbeaten streak against the Whitecaps to 15. The Sounders are 10-0-5, counting the postseason, since losing to Vancouver on April 14, 2017.

Stefan Frei posted his second shutout of the season and 88th of his MLS career but didn’t make a single save. All 10 of Vancouver’s shots were off-target.

In the fourth minute, Seattle’s Fredy Montero had his point-blank shot saved by Cropper. As the rebound went to Montero, Cropper was called for a foul in the box to set up a penalty kick.

Lodeiro stood at the spot one minute later and sent a left-footed shot into the lower left corner to get the Sounders on the board. It was his third goal of the season.

Ruidiaz scored his first goal of the night in the 28th minute when he sent a right-footed shot past Cropper into the right corner.

Ruidiaz notched the brace in the 54th minute on a play in which he was heading toward the net. Leo Chu delivered a cross and the running Ruidiaz knocked it into the net with his right foot for his fifth goal of the campaign.

Ruidiaz had a shot at the hat trick eight minutes later as he eluded Cropper and sent a shot toward the goal. However, Vancouver’s Ranko Veselinovic hustled to get in front of the net and kicked the ball away.

Roldan scored his first goal of the season in the 89th minute when Cropper was unable to stop his right-footed shot.

Vancouver’s best scoring attempt came in the 32nd minute when Ryan Gauld took a direct kick. Gauld had his left-footed attempt blocked by the Seattle wall, but he got the rebound and sent another left-footed shot wide right of the net.