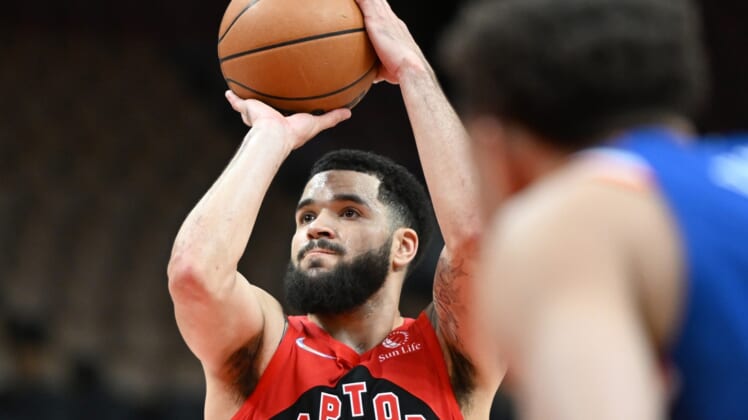 With most of their players back in the lineup, the Toronto Raptors will be going for their third straight victory Tuesday night against the visiting San Antonio Spurs.

Scottie Barnes, the last regular to return from health and safety protocols for the Raptors, scored 13 points Sunday in a 120-105 victory over the visiting New York Knicks.

Slightly more than a week ago, the Raptors were trying to assemble a team while having 10 players in the COVID-19 protocol. With the regulars back, Raptors coach Nick Nurse must figure out his rotations.

“We’ve got to iron it out and figure out the rotations and all that stuff positionally,” Nurse said before the game Sunday. “It’ll be interesting to figure out who’s playing what position, how (opposing teams) match up against us and who’s doing what. It’s going to be interesting to work in our bigs, as well.”

The depleted Knicks, who were without such key players as Julius Randle, did not provide much of a test on Sunday. Toronto cruised behind Fred VanVleet’s season-best 35 points.

The Spurs have lost three in a row, including a 117-116 overtime heartbreaker to the host Detroit Pistons on Saturday on Saddiq Bey’s 3-pointer with 2.1 seconds to play.

Bryn Forbes led the Spurs with 27 points off the bench.

“Down the stretch, he was great,” Spurs coach Gregg Popovich said. “We just missed too many free throws when it counted and made some sloppy plays.”

San Antonio led by as many as 17 points in the second quarter but trailed 85-81 after the third quarter. The Spurs were without Lonnie Walker, Doug McDermott and Dejounte Murray because of COVID-19 protocols.

The Raptors will complete a four-game homestand on Tuesday, and a victory would give them a .500 record for the season.

“I’m always pretty open-minded about what (the starting lineup) looks like,” Nurse said. “I’ll say that it’s not going to be that way every night if we’ve got a healthy roster. Again, depending on who we’re playing still matters, but I’m hoping that this group will give us our best defensive team at the end of games and things like that, and if they can get some reps together and get some connection and things like that hopefully it’s going to be a real tough defensive team and that’s the end goal, to figure out.”

Siakam had 20 points and 14 rebounds on Sunday, and has gathered 33 rebounds over his past two games. Anunoby had 14 points.

With the game under control, VanVleet did not play in the fourth quarter. He has scored a total of 66 points in the two games since clearing protocols.

“I think we felt good about our group all year,” VanVleet said. “I just like our spirit and our chemistry and kind of the enthusiasm that we have for the game. It’s going to take time to get it … where we need it to be.”