Raptors try to keep it rolling against Knicks 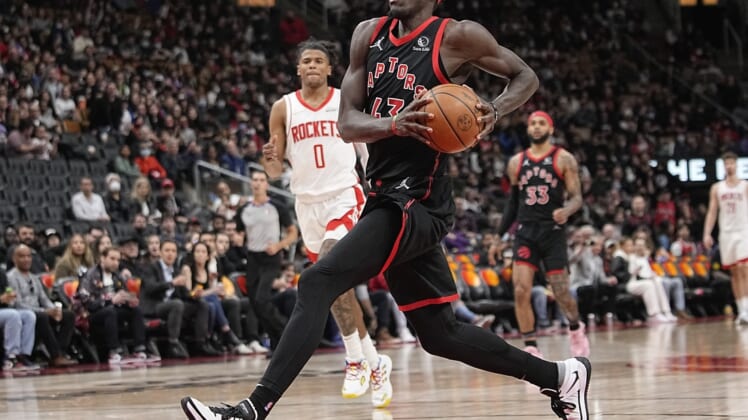 Having qualified for the NBA playoffs for the eighth time in nine years, the Toronto Raptors will try to sustain their strong late-season momentum Sunday as they finish the regular season in Madison Square Garden against the New York Knicks.

But the Raptors know they’re ready for the playoffs to begin.

The Raptors are assured the fifth seed but will have to wait until Sunday’s results to determine whether they’ll travel to Boston or Philadelphia to open the playoffs later in the week. The 76ers won on Saturday, which means Toronto cannot move up to the No. 4 seed and its accompanying home-court edge for the first round.

Friday, the Raptors (48-33) won for the 14th time in 17 games, edging the Houston Rockets 117-115. The Knicks, meantime, overcame a double-digit deficit to rout the Washington Wizards 114-92, in a game pitting teams outside the playoff picture.

The Celtics and 76ers (50-31) hold identical records entering the finale with the Celtics owning the tiebreak advantage due to their better record within the Atlantic Division. The Celtics can secure the No. 3 spot by beating the Memphis Grizzlies on Sunday, but if Boston loses and Philadelphia beats also-ran Detroit, the Sixers would move into the third slot, dropping the Celtics into the 4 vs. 5 series with Toronto.

Regardless of who they play, the Raptors will enter the postseason as the hottest team in the Eastern Conference after turning their fortunes around over the last month. Toronto entered play March 9 amid a three-game losing streak and in seventh place in the East, three games out of the sixth seed and just 4 1/2 games ahead of the 11th-place Wizards.

Still, even without playoff seeding at stake, Raptors guard Gary Trent Jr. suggested that they will not change their approach Sunday.

“Every game we go out and play, they’re meaningful, whether it’s going on our record or not,” he said after scoring the winning points on a layup with 4.8 seconds remaining Friday night. “Just preparing yourself mentally, going through moves and motions of what you’re going to need in a week or two.”

A solid final month wasn’t enough to get the Knicks (36-45) into the play-in tournament. New York, which will miss the playoffs for the eighth time in nine seasons, is 11-7 since March 4.

During the victory — in which they spotted the Wizards the game’s first 10 points before eventually leading by 26 in the second half — New York’s budding franchise star RJ Barrett left with a sprained right knee in the second quarter after he landed awkwardly while completing an assist to Jericho Sims.

Barrett, who is eligible for a max extension this summer, was expected to undergo an MRI Saturday and will miss Sunday’s finale. The 21-year-old averaged 20.0 points and 5.8 rebounds in 70 games in his third NBA season.

“I worry about everything,” Knicks coach Tom Thibodeau said Friday night. “I don’t like to see any of our players get injured, but it’s part of the game. He’s got soreness right now and obviously he’ll be out (Sunday).”