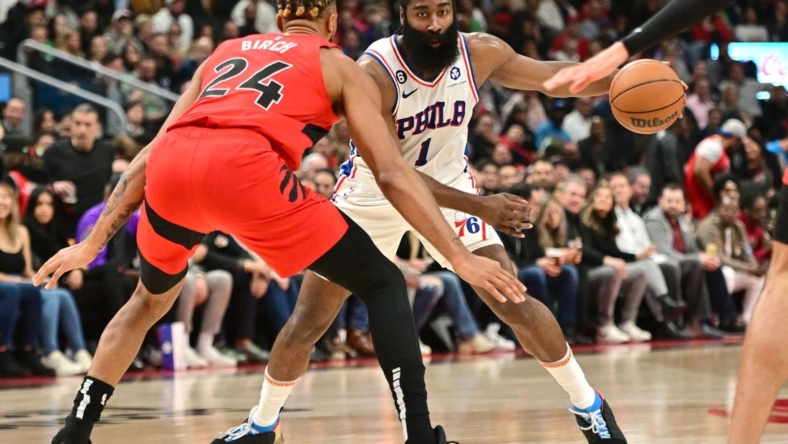 Gary Trent Jr. scored 21 of his 27 points in the second half and the Toronto Raptors defeated the visiting Philadelphia 76ers 119-109 on Wednesday night.

Pascal Siakam added 20 points and matched his career best with 13 assists for the Raptors, who have won two in a row.

Joel Embiid and Tyrense Maxey each scored 31 for the 76ers, who have lost four of their first five games. James Harden added 18 points and De’Anthony Melton had 12

The Raptors took a 10-point lead into the fourth quarter.

Toronto scored the first six points of the fourth. Maxey capped a 12-2 run with a dunk.

P.J. Tucker hit a 3-pointer to cut the lead to eight points with 2:15 remaining in the fourth quarter.

But Barnes made a dunk with 1:36 to play and the Raptors led by 12 points.

Harden made a 3-pointer to cut the lead to seven. Barnes made a layup and a free throw to complete the scoring.

Toronto increased the lead to 17 on Dalano Banton’s layup with 4:30 remaining in the second quarter. Embiid completed the first-half scoring with two free throws cutting Toronto’s lead to 63-53 at halftime.

The Raptors did not commit a turnover in the first half and the 76ers made six.

Embiid opened the third-quarter scoring with a 3-pointer.

Maxey’s layup and free throw cut the lead to six with 7:08 to play, but Toronto answered with five straight points.

Maxey made a layup and a 3-pointer to trim the margin to six with 2:58 to go in the third.

Trent finished the third-quarter scoring with a 3-pointer to give Toronto an 89-79 lead. Trent scored 16 points in the third quarter. The Raptors made their first three turnovers of the game in the third.

The teams meet again on Friday, also in Toronto.