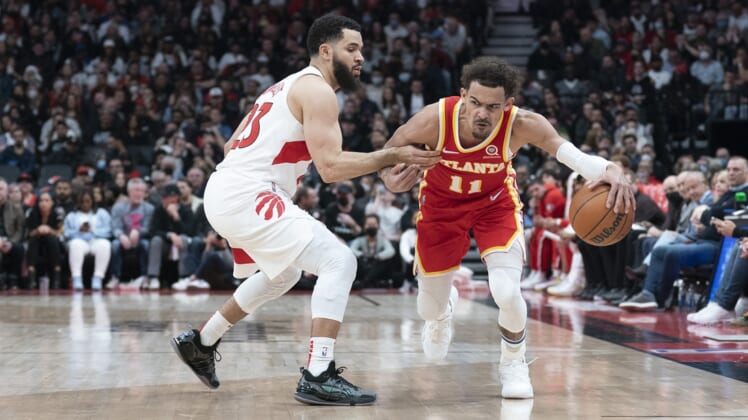 Pascal Siakam scored a game-high 31 points and the Toronto Raptors clinched an Eastern Conference playoff spot by responding to losing a late lead with eight straight points that helped produce a 118-108 victory over the visiting Atlanta Hawks on Tuesday night.

Fred VanVleet contributed a 3-pointer to the difference-making run for Toronto (46-33), the current fifth seed in the East which assured itself of a spot in the postseason with a combination of the win and a Cleveland Cavaliers loss at Orlando.

Trae Young had 26 points and a game-high 15 rebounds for Atlanta (41-38), which needed to finish with all wins and Toronto all losses in order for the Hawks to earn a top-six spot in the East.

After blowing a 12-point, fourth-quarter lead and falling behind 103-102 on a free throw by Young with 2:53 to go, the Raptors tightened the defensive screws, holding the guests scoreless until two free throws by De’Andre Hunter with 30.3 seconds remaining.

By that point, Toronto had built a 110-103 lead, with Precious Achiuwa drawing the Raptors even with a free throw with 2:33 left and Scottie Barnes giving the hosts the lead for good on a short-range basket with 1:53 to go.

VanVleet’s key 3-pointer came on Toronto’s next possession, pushing the advantage to 108-103, and when Siakam capped his big night with two free throws, the Raptors had taken control at 110-103 before Hunter’s drought-ending foul shots.

Siakam complemented his 31 points with 13 rebounds for the Raptors, who won for the sixth time in their last seven games.

Barnes also recorded a double-double with 19 points and a game-high-tying 14 rebounds, while Chris Boucher chipped in with 18 points, Gary Trent Jr. with 14, VanVleet with 12 to go with a team-high nine assists, and Achiuwa with 11 points.

Atlanta saw a five-game winning streak come to an end despite 21 points from Kevin Huerter, 20 from Hunter and 19 from Bogdan Bogdanovic. Clint Capela compiled the game’s fourth double-double with 10 points and a game-high-tying 14 rebounds.

Toronto was the first to take a double-digit lead in the tightly contested game, using a 10-4 burst to start the final period to build a 99-87 advantage on a Barnes driving hoop at the 9:53 mark.

But the Hawks held the Raptors to just three points in the next 7:20, eventually drawing even at 102-all on a Young basket with 4:29 remaining.