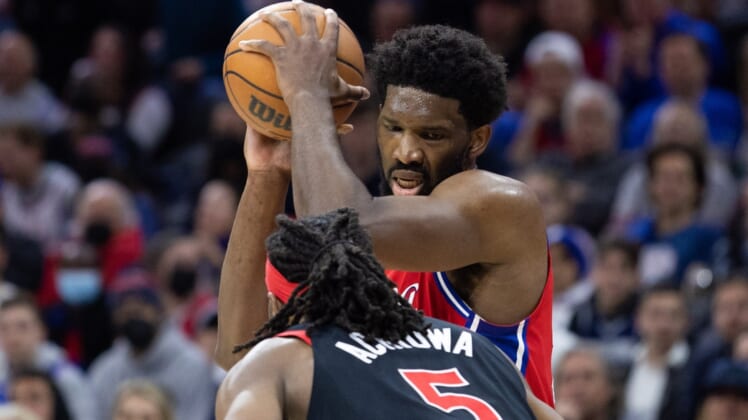 Trailing 2-0 in their Eastern Conference first-round playoff series, the Toronto Raptors must limit Joel Embiid and get healthier in Game 3 Wednesday night against the visiting Philadelphia 76ers.

The 76ers opened as 2.5-point favorites at BetMGM. The line has moved to 1.5 with Philadelphia backed by 84 percent of the spread bets and 90 percent of the handle. The line is 2.0 at DraftKings, where the 76ers have drawn 87 and 93 percent of the action, respectively.

The health variable appears to be trending Toronto’s direction.

With Scottie Barnes (sprained ankle) out for Toronto, Embiid dominated with 31 points and 11 rebounds Monday night in Philadelphia’s 112-97 Game 2 victory.

Barnes remains listed as doubtful for Game 3, Trent is “much better” and will play, and Young is a full-go.

Raptors coach Nick Nurse said Wednesday that Barnes was a “maybe” and is out of a walking boot.

Nurse was encouraged by the fourth quarter in which his team had a 26-17 edge.

“The way we finished the game, I don’t see our guys are discouraged at all,” Nurse said. “I think they’ll rise up and they’ll play better, and we need to get one.”

Fred VanVleet finished with 20 points and seven assists for Toronto after his promising start of 15 points and two assists in the first quarter.

“It’s that time of year; it’s a great challenge for all of us in our young career to step up,” VanVleet said. “This is the platform where you want to go from good to great. And you know, I’m speaking for myself, but I didn’t answer that call tonight.”

There was some chippiness in the first quarter, with Embiid and Toronto’s OG Anunoby each getting technical fouls after shoves.

Embiid said that being physical was by design after Nurse had criticized the officiating after Game 1, in which Embiid had five fouls.

“From the get-go, I didn’t really want them to set that tone,” Embiid said. “I wanted myself and us to set that tone. That’s why I picked up that first early technical foul, because I felt that there was a missed call on the other end and on defense. I just wanted to make sure that the refs just let us know how physical they wanted the game to be.”

“He’s the most dominant player in this league, to me, physically,” 76ers coach Doc Rivers said. “And that’s what we told him, ‘Be who you are. Be dominant. Be physical.’ I thought, the first three minutes, they spent time trying to hit him and deliver blows to him and I was like, ‘No, Jo, you be the dominant guy.’ I loved how he ran down the floor into the paint (for) rim runs. That’s good for us, and we need that more.”

Nurse said the Raptors changed “a few things schematically” against Embiid, who had 19 points and 15 rebounds in Game 1.

“I thought they made a real concentrated effort at getting him the ball a lot more in a lot deeper areas (Monday),” Nurse said. “He gets 31 (points), 14 free throws (making 12). I’ve got to look at the tape and see what we can do to clean some of that stuff up. I’m encouraged because I thought we started turning him over a little bit. … But I think it’s a pretty good night there if we can cut those free throws in half.”

Near the end of Game 2, Embiid talked to Nurse. “I told him, respectfully, I told him to stop (complaining) about calls,” Embiid said, “because I saw what he said last game.”

Said Nurse: “He was saying to me that ‘I’m going to keep making all the free throws if you keep fouling me,’ and I said, ‘Well, you might have to.’ A good player, man. I have a lot of respect for him.”

The game has the lowest Over/Under market among the three playoff games Wednesday.

The 216.5-point market at BetMGM has seen one-sided action on the Over with 81 percent of the bets and 83 percent of the handle. The market is slightly lower at 216.0 at DraftKings, where the Over is also drawing heavy support with 86 and 79 percent of the action, respectively.