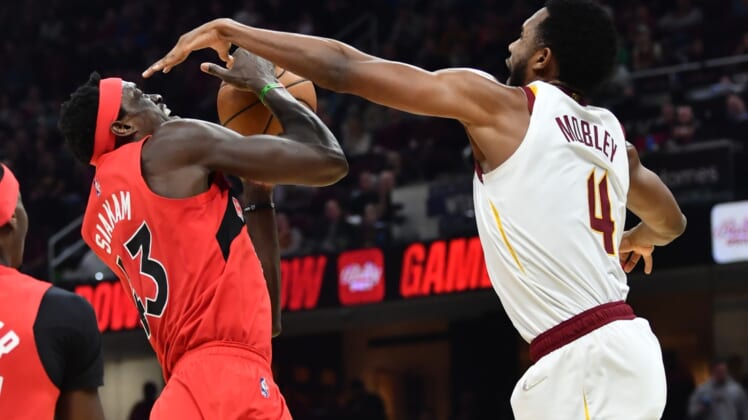 The Toronto Raptors need to find a way to beat the Cleveland Cavaliers, a team they are chasing for a top-six playoff spot, in the crucial opener of a four-game homestand on Thursday night.

Cleveland is 3-0 against Toronto this season.

The Cavaliers are sixth in the Eastern Conference, one game ahead of the seventh-place Raptors and one game behind the fifth-place Chicago Bulls.

Both Cleveland and Toronto are coming off some defensive lapses in losses on Monday.

“It was terrible,” Cavaliers coach J.B. Bickerstaff said. “We did not compete at the level that we needed to compete at (Monday) to win this game. These are all the learning experiences that we talk about.

“We got caught up in the show and instead of doing the things we needed to do and focus on the bigger picture and the task at hand, we allowed this moment to overtake us.”

Toronto lost 113-99 at Chicago, with former Raptor DeMar DeRozan scoring 26 points on 11-of-14 shooting from the field. Zach LaVine also scored 26 for the Bulls.

“We just weren’t ourselves defensively at all tonight,” Raptors coach Nick Nurse said. “We were out of schemes quickly and we were just not moving.”

Fatigue could have been a factor. The Raptors defeated the host Philadelphia 76ers on Sunday night. They fell in overtime at home to the Lakers on Friday following a 5-1 road trip that began with a March 6 loss at Cleveland.

Cleveland lost All-Star center Jarrett Allen to a broken finger in that March 6 meeting with Toronto.

“He’s improving, but it’s a bone and it takes time to heal,” Bickerstaff said on Monday.

“They just need to be in their spots and make sure that we’re clear on executing the game plan,” Bickerstaff said. “We knew if we won the paint, we’d give ourselves a chance to win the game (on Monday). But we weren’t in our spots and there wasn’t any resistance there.

Dean Wade (knee) continues to be out for Cleveland. He has missed five consecutive games.

The Raptors have been without OG Anunoby (broken finger) and he is not expected to return Thursday.

Raptors All-Star Fred VanVleet did not play in Philly but did play in Chicago as the team manages his sore knee.

“I think, for the most part, I’ve always elected to play and play until somebody stops me,” VanVleet said. “So, here we are and some days I feel better than others but for the most part I can do my job pretty good out there, definitely not where I’d love to be but it’s a process to get there.”