Raptors ‘grinding it out,’ with test vs. Wizards next 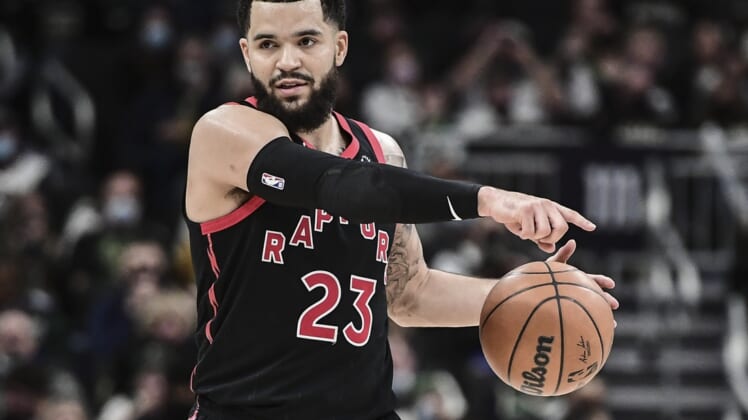 After two close losses, the Toronto Raptors will be out to end a five-game road trip by clinching their season series against the Washington Wizards on Friday night.

Toronto has won two of three games against Washington this season.

In a tough loss on Wednesday night, the Raptors had a slim 96-95 lead against the Dallas Mavericks after Fred VanVleet hit a 3-pointer with 1:55 to play.

As he did in the 104-99 loss to the Miami Heat on Monday, Raptors coach Nick Nurse used only seven players with VanVleet (18 points, 12 assists), OG Anunoby (19 points) and Pascal Siakam (20 points) each logging more than 40 minutes.

“We’re grinding it out,” VanVleet said. “We’ve got high-character guys, a great medical team, great organization and we’re doing everything we can to be ready to play every night. We’re getting good performances from the guys we’re playing. This is what we got until otherwise.”

The Raptors, who will play their fifth game in eight days Friday, have been without Gary Trent Jr. (ankle) and Khem Birch (broken nose).

The Wizards are 3-2 with three games remaining on an eight-game homestand after losing 119-118 to the Brooklyn Nets on Wednesday night.

Washington, which trailed by as many as 16 points in the third quarter, saw Kyle Kuzma miss a 3-point attempt with 4.7 seconds left in the game followed by Spencer Dinwiddie’s failed long-distance desperation attempt in the final second.

“We beat ourselves in the first half,” said Kuzma, who had 16 points. “Point-blank, period. You can’t let somebody score 74 points in a half. That’s tough to recover (from).”

Bradley Beal had 23 points and nine assists and Montrezl Harrell and Rui Hachimura each added 14 points off the bench.

In contrast to the Raptors, Washington used 11 players on Wednesday with only Beal playing as many as 36 minutes and three others logging 31 minutes each.

With 5:42 remaining in the game, Brooklyn assistant coach David Vanterpool deflected a pass from Dinwiddie intended for Kuzma in the corner that led to a steal. The officials did not make a call.

“AAU basketball — that’s what it looked like,” Kuzma said.

Crew chief Ben Taylor told a pool reporter that the officials on the floor did not see a deflection and that there is no mechanism in place for the play to be reviewed. On Thursday, the NBA said it is investigating the interference play.