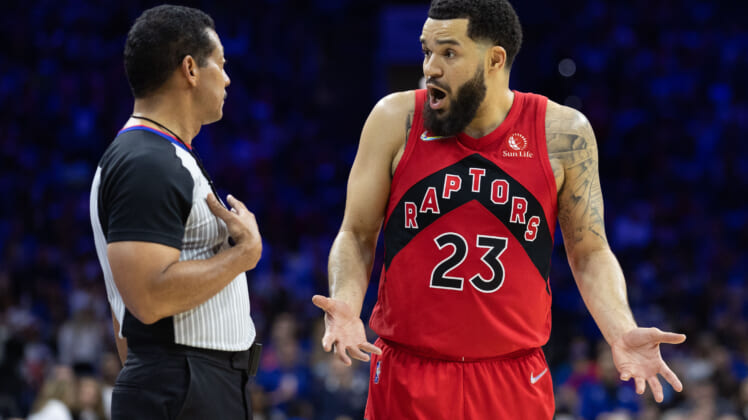 Toronto Raptors All-Star point guard Fred VanVleet was knocked out of the team’s Game 4 win against the Philadelphia 76ers after straining his left hip at the end of the first half.

With five minutes left in the second quarter, the Raptors starting point guard, and first-time All-Star, came up lame after a made shot for his team. He was noticeably upset and nearly ripped his entire jersey in half before slowly storming off the court and heading straight to the locker room.

The assumption was that VanVleet may have done more damage to the bruised knee he was already playing through. However, it was revealed in the third quarter by Nabil Karim of the TNT broadcast team that VanVleet had suffered a completely new injury. This time a strained left hip.

It is possible that adjustments he made in his style of play to deal with his knee injury may have led to the new issue in his hip. He was ruled out for the rest of Game 4. The Raptors entered the game down 3-0 in the series, and needed a win on Saturday or see their season come to a close in the opening round of the NBA playoffs.

Over the first three games of the series, VanVleet was third on the team in scoring with 16.7 points per game and is leading the Toronto Raptors in steals (2.3) and blocks (1.3).

Despite being without an extremely important piece of their team, the Raptors would ride Pascal Siakim’s game-high 34 points to a 110-102 win and avoided elimination from the 2022 NBA playoffs. Game 5 of the series is on Monday in Philadelphia.