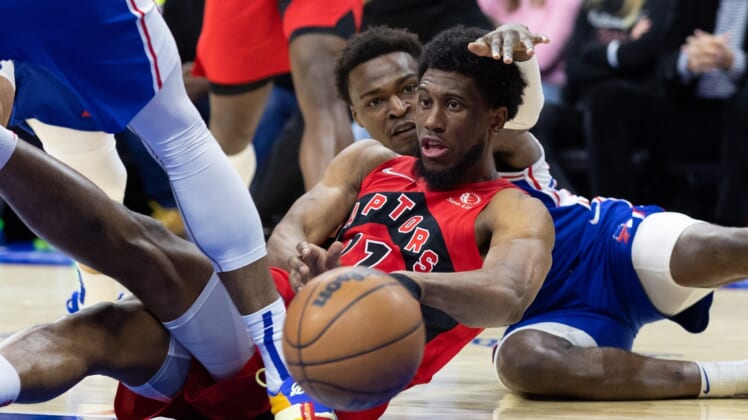 Pascal Siakam scored 23 points to help the visiting Toronto Raptors stave off elimination Monday courtesy of a 103-88 victory over the Philadelphia 76ers in Game 5 of an Eastern Conference first-round playoff series.

Siakam added 10 rebounds and seven assists for the fifth-seeded Raptors, who have won two in a row after losing the first three games in the best-of-seven set.

No team has overcome a 3-0 series deficit in NBA history.

Game 6 is Thursday in Toronto.

Precious Achiuwa made 7 of 11 shots to finish with 17 points for the Raptors. OG Anunoby and Gary Trent Jr. each had 16 points and NBA Rookie of the Year Scottie Barnes added 12 points and eight rebounds in the win.

Toronto, which played without All-Star guard Fred VanVleet (left hip flexor strain), shot 51.2 percent from the floor and enjoyed a 56-36 edge in points in the paint.

Philadelphia’s Joel Embiid collected 20 points and 11 rebounds as he battled through a torn ligament in his right thumb. Prior to the game, Embiid was fined $15,000 for criticizing the officiating following the 76ers’ 110-102 loss to the Raptors in Game 4 on Saturday.

On Monday, Embiid committed his fifth foul as Philadelphia trailed 88-79 with 5:38 remaining in the fourth quarter. Anunoby and Trent subsequently sank back-to-back 3-pointers to extend Toronto’s lead to a 15 points with 3:20 left, effectively sealing the win.

Tobias Harris added 16 points and James Harden added 15 for the fourth-seeded 76ers. Harden, however, made just 4 of 11 shots from the floor and offset hi seven assists with five turnovers.

Toronto scored the first 12 points of the second quarter to extend a two-point lead to 41-27. Chris Boucher had three baskets during that spurt for the Raptors, who held the 76ers to just 14 points in the quarter to take a 54-41 advantage into halftime.

Philadelphia scored six consecutive points bridging the third and fourth quarters to trim Toronto’s advantage to 75-68. The Raptors, however, exploited the interior with former Sixer Thaddeus Young and Achiuwa each sending home alley-oop dunks to up the lead to 81-70.