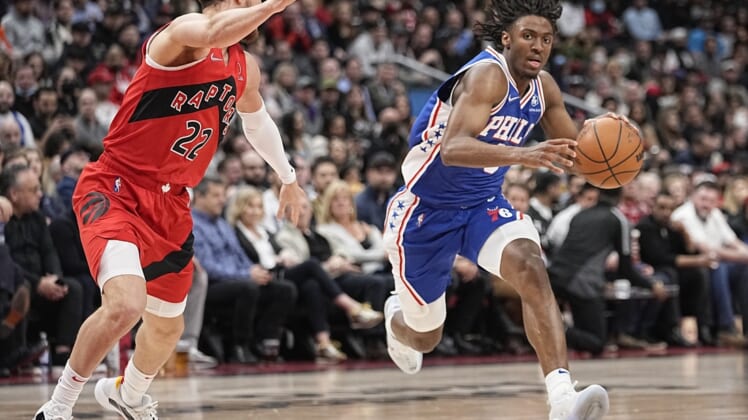 Precious Achiuwa had 20 points for Toronto and Scottie Barnes contributed 13 points and 10 rebounds.

Toronto took a two-point lead into the fourth quarter. The lead reached eight on Barnes’s 3-pointer with 8:57 to play. Trent followed with an 11-footer to bump the lead to 10. Maxey’s bank shot and free throw cut the lead to seven.

Maxey’s jumper reduced the lead to three, but Siakam answered by banking in a hook shot.

Embiid made two free throws with 2:42 to play, cutting the lead to four.

Siakam’s layup increased the lead to six points with 1:50 to go in the fourth quarter. Barnes followed with a dunk.

Embiid’s dunk and Maxey’s layup cut the lead to four with 52.9 seconds remaining.

Siakam’s layup and free throw had the lead at seven. Embiid made three foul shots.

Trent’s 3-pointer gave Toronto a 35-34 lead with nine minutes left in the second quarter. Embiid finished the first-half scoring with a layup and a jumper and Philadelphia led 60-56.

Green was presented with his ring from Toronto’s 2019 championship in a pregame ceremony.

OG Anunoby (thigh) and Fred VanVleet (knee) did not play for Toronto.

Matisse Thybulle (ineligible) did not play for Philadelphia.