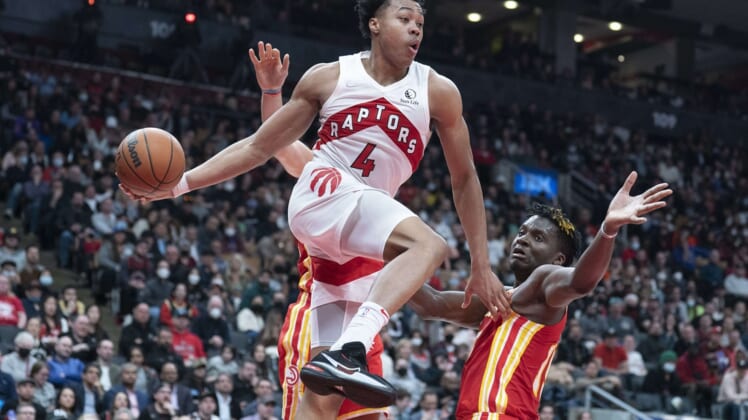 After securing a playoff spot, the Toronto Raptors will look to clinch the season series against the visiting Philadelphia 76ers on Thursday night.

The Raptors (46-33) posted a 118-108 win over the visiting Atlanta Hawks on Tuesday night to earn a spot in the top six of the Eastern Conference and avoid the play-in tournament.

The victory was the 12th in the last 15 games for Toronto, which has won two of the first three meetings with Philadelphia this season.

The Raptors, who missed the playoffs last season, have improved as this season progressed.

“I think they’ve formed some kind of identity,” Toronto coach Nick Nurse said. “It’s a little quirky and a little different but it’s a hard-playing, competitive identity and they found a way to grind out enough wins to get them in this situation. I don’t think they were picked to get here so that’s always a good accomplishment.”

Pascal Siakam collected 31 points and 13 rebounds and Scottie Barnes had 19 and 14, respectively, for Toronto on Tuesday.

The 76ers have won three straight, the past two on the road after defeating the Indiana Pacers 131-122 on Tuesday.

Joel Embiid recorded 45 points and 13 rebounds in the victory over the Pacers.

Embiid moved past Los Angeles Lakers superstar LeBron James into first place in scoring with an average of 30.4 points per game. James is at 30.3.

“It’s great, but the win is also great,” Embiid said. “So that’s all I can control. Just go out there and do whatever is needed. You know, at times, like (Tuesday), I started off the game and they doubled hard and tried to make the right plays. Also, my teammates got me a bunch of easy baskets, which got me going.”

Embiid expects the same close attention from the Raptors, however he said he’ll take what the defense gives him.

“So, just trying to make plays and then, obviously, it makes it easy when we are knocking down shots, too,” he said.

Philadelphia’s Tyrese Maxey drained a career-high eight 3-pointers to finish with 30 points. James Harden had 11 points and 14 assists for the 76ers, who are battling the Boston Celtics and Milwaukee Bucks behind the first-place Miami Heat.

“It’s kind of crazy, but that’s how the East has been tough this year,” Embiid said. “One day, you think you might play this one team (in the first round). And the other day, you might play another team. But it’s fun. It’s fun to pay attention to.”

Fred VanVleet has continued to play with a sore right knee.

VanVleet had 12 points on Tuesday following a 4-for-21 performance from the floor, including 2-for-12 from 3-point range. He made a 3-pointer late in the game that helped clinch the win.

“I knew it was coming,” VanVleet said. “I was just hoping there was enough time. I knew I had one more left in the chamber, but man if I played a little bit better that game is probably over at halftime or the third quarter to be honest with you, so that was frustrating.”