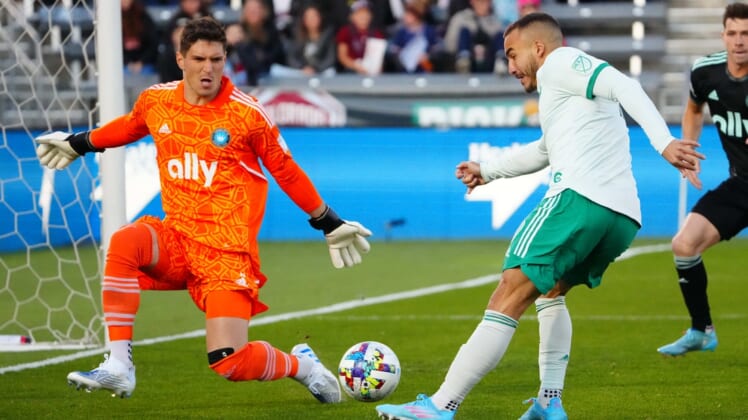 Charlotte FC (3-5-1, 10 points) had been outscored 9-2 while losing the first four away matches of their first MLS season before playing much tighter defense against the Rapids.

Rapids goalkeeper William Yarbrough made five saves, including a major one in the first minute of second-half stoppage time.

Gyasi Zardes entered in the 60th minute to make his Colorado debut one day after being acquired from the Columbus Crew. Zardes didn’t take any shots.
Colorado is 0-2-3 during its five-game funk.

Charlotte put five shots on target and outshot the Rapids 16-11.

Yarbrough kept the Rapids from a disappointing loss when he thwarted Charlotte’s McKinze Gaines during extra time.

Benjamin Bender was near midfield when he sent a pass in the vicinity of Gaines, who beat two Colorado defenders to the ball. Gaines broke in and delivered a right-footed shot that Yarbrough stopped with his hand.

The Rapids had a chance in the fifth and final minute of second-half stoppage time but Lucas Esteves sent a hard left-footed shot over the net.

Charlotte had a couple strong chances in the first 15 minutes of the second half.

In the 49th minute, Charlotte had a flurry of activity as Jordy Alcivar’s right-footed shot was stopped by Yarbrough, who also made the save on Karol Swiderski’s rebound right-footer. The ball found its way to Swiderski again but he sent a left-footed shot wide to the left.

Ten minutes later, Alan Franco was set up in front of Yarbrough but lifted his right-footed shot over the net.

Colorado’s Diego Rubio hit the crossbar twice with left-footed shots in the first half. The missed opportunities occurred in the ninth and 24th minutes.