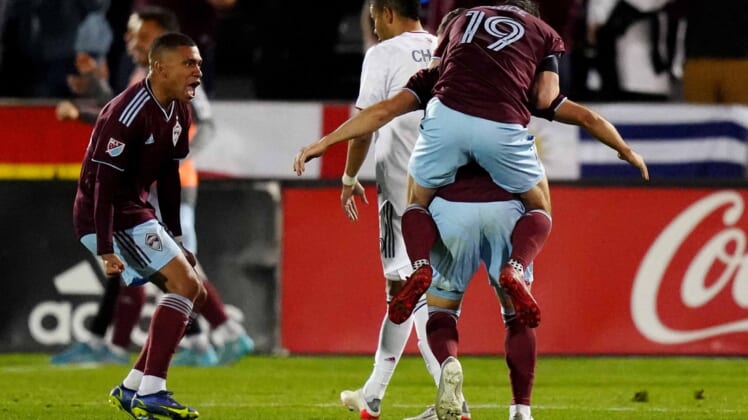 Lalas Abubakar’s goal nine minutes into the second half proved to be the equalizer as the Colorado Rapids rallied for a 1-1 draw with short-handed Real Salt Lake on Saturday in Commerce City, Colorado in this season’s first rendition of the Rocky Mountain Cup.

The draw allowed the Rapids (2-2-2, 8 points) to tie a team mark for consecutive home games without a loss at 19 (11 wins and eight draws), which expands on the longest active streak in MLS. Colorado had a four-match home winning streak snapped with the draw.

Real Salt Lake took the lead in the 45th minute on a penalty kick by Pablo Ruiz after the Rapids’ Keegan Rosenberry was whistled for a foul on Justin Meram in the area. Ruiz made short work of his PK, beating Colorado goalkeeper William Yarbrough low to the left side with a left-footed shot from the spot.

It was Real Salt Lake’s only shot in the first half.

Abubakar knotted the match in the 56th minute, scoring from the left side of the six-yard box after a pass to the far post from Michael Barrios. Abubakar’s right-footed shot to the bottom-left corner beat RSL keeper Zac McBath, who drove but had the shot skip under him.

Yarbrough kept the game tied by leaping to bat away a blistered shot from RSL’s Sergio Cordova in the 76th minute.

Real Salt Lake (3-1-2, 11 points) was without nine players due to injury or illness, which forced them to call up two players from its MLS Next Pro league team because of “extreme hardship.”