Rapids, Minnesota United each look to emerge from middle ground 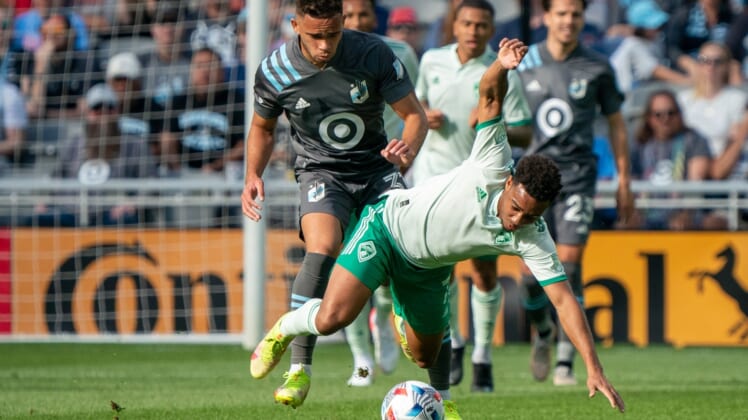 The Colorado Rapids and Minnesota United FC find themselves in pretty much the same place a handful of matches into the 2022 Major League Soccer season.

Both teams have identical records at 2-2-2, both have eight points, both have a goal differential of zero, both have played decently at home and not so well on the road, and both are eager for a victory.

On Saturday night at Allainz Field in Saint Paul, Minn., the two clubs will face off, looking to get a leg up on the other in the Western Conference table.

The Loons are coming off a match in which they failed to find the back of the net, falling 1-0 to Austin FC. Through six matches, Minnesota has struggled to score, netting just five goals. Earlier this week, coach Adrian Heath couldn’t quite identify why his team was struggling in the attacking half of the pitch.

“If I knew, if I could put my finger on it, I would certainly work on it and try and help it,” Heath said. “We’ve got to keep working hard and do the stuff that we know works and hopefully get a spark from one of them that ignites the other two or three. If we do that, I know this group can score goals because they’ve proved that.”

Luis Amarilla has two goals for Minnesota this season. Three of the team’s five scores have been unassisted.

Colorado has had a bit more luck finding the back of the net than Minnesota this season, scoring eight goals. Diego Rubio has powered the offense with three goals and one assist. Michael Barrios and Lucas Esteves each have three assists.

The Rapids were riding a four-game unbeaten streak (2-0-2) before getting beaten 3-1 last weekend at FC Dallas. Despite scoring just once in that road loss, Rapids coach Robin Fraser isn’t worried about his squad’s offensive firepower.

“Where we are now, we have belief that we can create, and we can create against most teams, most formations, most lineups — we feel like we have the ability to create some chances,” Fraser said. “I think there has to be a level of confidence from that. It’s different if we don’t create any chances and we’re scrambling. … Scoring goals is the hardest thing in the game. For us, it’s just going to take more and more work.”